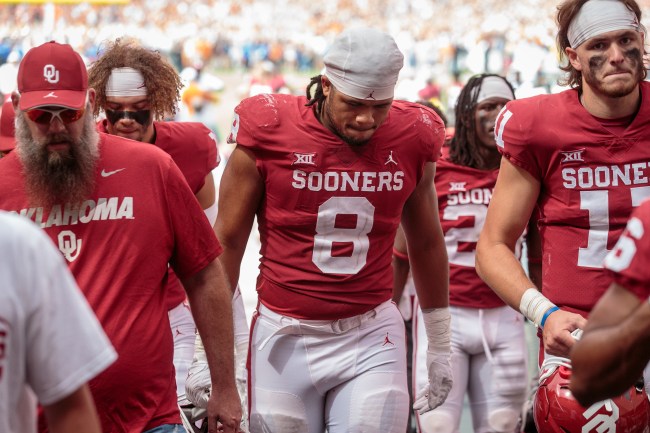 Oklahoma football is as proud of a program as any. They are 5th all-time in wins and have more conference championships than anyone else with a whopping 50. They’ve had recent success, too, having made the College Football Playoff four times.

But, this year’s Sooner football team is not so good. After a 3-0 start including a blowout of Nebraska, OU lost two in a row to Kansas State and TCU. But, they had a chance to turn it around on Saturday in the Red River Shootout against rival texas. They did not, in fact, turn it around.

That’s a shocking scoreline, and somehow that scoreline doesn’t even do it justice. Texas outgained the Sooners 585-195 in a game that was just an absolute romp in every facet. The Longhorns did whatever they wanted to Oklahoma in all three phases, and embarrassed them in historic fashion. It is the worst shutout loss in the history of Oklahoma Sooners football.

There were plenty of embarrassing moments for OU, too. Chief among them is this jump pass that did not go to plan. Anytime you can have a running back jump pass, you’ve gotta do it.

It was that kind of day for the Sooners.

It was an all-time great Twitter meltdown by Sooner fans

Of course, Twitter was full of despondent OU fans.

Even Texas alum Kevin Durant got in on the Venables bashing.

Ayo somebody tell Brent Venables to pass the joystick….this ain’t it

Some OU fans are defending Venables, saying he was left a bare cupboard when Lincoln Riley left and some players transferred with him. But, that’s just not true. They’re ranked ninth in the country in team talent ranking by 247 sports

Listen man, people can get mad at Brent Venables all they want, but it’s not like he was left with much on this roster. Oklahoma fans are going to have to be extremely patient for the first time in a long time. The whole program is going through a reset. https://t.co/6rR6nWLLbK

This is the correct take, Sooner fans.

The Oklahoma coaching staff has done a terrible job with this group. This is a complete embarrassment. I’m not here for rebuilding and first year excuses, they appear to be incompetent at everything. It’s just stunning how bad they are.

For me, this will be the lasting image of this year’s Red River Shootout.

QUINN TO JT FOR THE TD!

Texas up 28-0 and OU fans are in their feels. pic.twitter.com/gECxSAD9PZ