It’s been a day for college kickers, and not the good kind of day. Missed kicks everywhere have changed and lost games and cost fans happiness and bettors money.

And, for Arkansas, it really should not have come down to a kick. A KJ Jefferson fumble at the goal line early on that was returned for a touchdown was truly the difference. But, it did come down to a kick. What happened on that kick will be remembered in the lore of both programs forever.

Razorback quarterback KJ Jefferson led a nice drive, and Little had a chance to give the Razorbacks a lead with 90 seconds left.

Arkansas’ kick hits the TOP of the upright… 😵‍💫

I watch a lot of football. Just this weekend, I will get paid to watch nearly 30 hours of it. I have never seen a kick hit the top part of the upright. The moment when the ball hit the upright and you couldn’t tell whether it was going to go in was agonizing.

Ultimately, Texas A&M and their strange traditions came out with a 23-21 win.

I don’t know what to say. This sucks

Molly Morrison is one of the best NBA Twitter accounts, but her take on the kick was hilarious,

arkansas kicker should still get the 3 points for originality

There are a lot of these kinds of comments about offensive coordinator Kendall Briles. But, likely to get a head coaching job somewhere anyways, so these fans will have their wish.

Arkansas 3-1 and has every goal in front of them still, but that’s a terrible way to lose to a division rival in Texas A&M 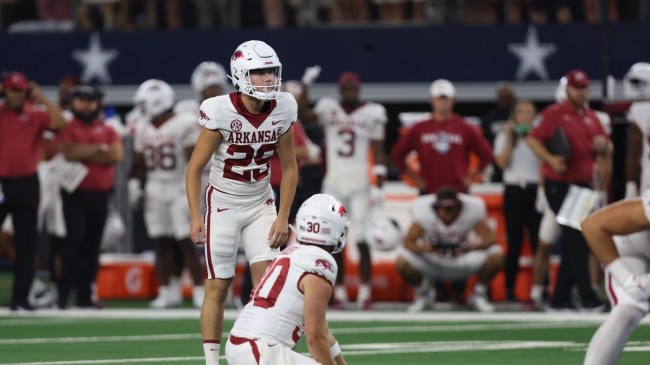