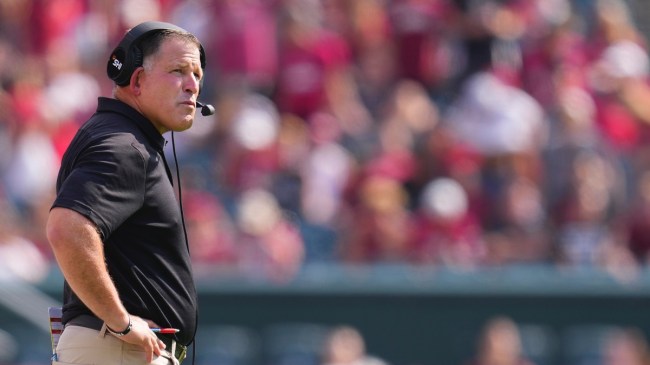 Ohio State and Rutgers are both in the Big Ten East, and that’s where the similarities end. The two football programs could not be more different in their history and current success. Even after Rutgers Coach Greg Schiano predicted a win in his press conference this week, no one truly believed that.

And, predictably, Ohio State blew the doors off of Rutgers behind five touchdowns from running back Miyan Williams. But, what happened late in the game on a seemingly inconsequential play has people talking.

Up 49-10 with nine minutes and change left in the 4th quarter, Buckeye Punter Jesse Mirco took the snap and took off to his right with a lot of green grass ahead of him. He gained 23 yards before getting absolutely leveled by Knight Aron Cruickshank.

Immediately the two teams got into it because who fake punts up 39 points?

And, of course, the fun police on Twitter were out in full force.

Up 39 in the 4th and you’re running a fake punt. Yeah, your punter deserved that hit. There’s a reason why no one likes Ohio State.

Ohio State ran a fake punt with a 39 point lead against Rutgers?

And then, the two coaches got into it.

Schiano has crapped out bigger turds then Ryan Day on a daily basis for the last 40 year’s. Let them fight pic.twitter.com/qZEsuqVfPj

Man what a fight it would’ve been.

Ryan Day later claimed that it was not a called fake punt and that Mirco took off by himself based on the read. He apologized to Schiano after the game.

You can hear Ryan Day apologize to Greg Schiano during their postgame handshake pic.twitter.com/azMoQplXYl

Either way, this was hilarious. I would actually respect Ryan Day more if he called a fake punt up 39 points against Rutgers in the fourth quarter. College football is the most hilarious sport and it doesn’t get funnier than that.