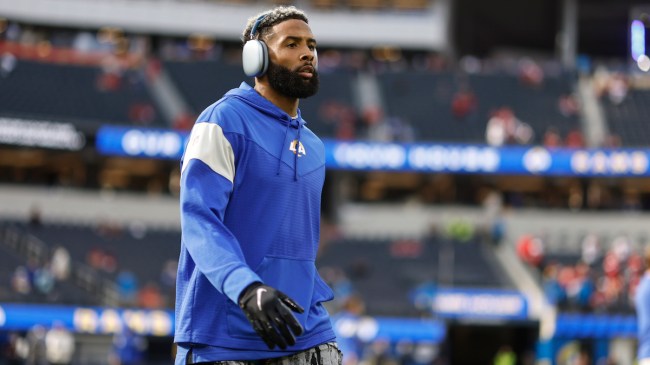 The 2022 NFL season kicked off on Thursday with the Los Angeles Rams and Buffalo Bills. While star wide receiver Odell Beckham Jr. didn’t suit up for the game, he did generate plenty of buzz by teasing two potential landing spots.

Beckham Jr. is arguably the best remaining free agent on the market, but he’s in no hurry to sign with a team while recovering from his torn ACL. The former Giants and Browns WR recently joked about his plans to sign with whoever wins the regular season opener between the Rams and Bills.

The Bills dominated the Rams in a 31-10 blowout victory and Beckham Jr. backed up his previous statement with a simple message for Bills Mafia: “Sheeesh…”

The Odell Beckham Jr. to Buffalo rumors are nothing new. Bills pass rusher Von Miller has been adamant in linking back up with his former Rams teammate after leaving this off-season.

Beckham Jr. continued leaning into the Bills Mafia excitement by replying to a photoshopped image of him in a Bills jersey. It seems he’s already picked out a uniform number too.

With OBJ feeding into the potential move, some were convinced his mind was already made up. Apparently dressing head-to-toe in Rams colors wasn’t enough to show otherwise. So Beckham Jr. set the record straight on his relationship with the team via Twitter.

He reminded everyone that it was only the first game of the season. The Rams are still the defending Super Bowl champs and one loss doesn’t mean their chance at a repeat is over.

Woah woah!!! Relax…. My heart is wit them Rams… they show me what the NFL is suppose to be like … and we won a ring, I’m forever grateful ! And listen it’s the first game of the season 😂😂😂 relax ! They lost to some dawgsss

OBJ Remains Open To Return With The Los Angeles Rams

While Beckham Jr. is grateful for his time in Los Angeles, it’s not a guarantee he returns. No team has currently made a convincing offer and that includes the Rams.

Perhaps all the talk surrounding his interest in the Bills will change things though. If the Rams front office offers him a generous deal, it appears he’s very much open to sticking around.

Ultimately, there’s still time until Odell Beckham Jr. will need to make a decision. He tore his ACL during Super Bowl LVI, so he’s only about 6 months out from the surgery.

Reports expect him to be fully healthy in early November, but so much can still happen before then.

The Rams and Bills are already two destinations hinted at by Beckham Jr., but more teams will likely make their case as the season progresses.

The NFL world reacts to the Bills' statement performance against the Rams https://t.co/GnuquhRhGX

Only time will tell where OBJ ends up, but fans can expect him to continue teasing potential destinations for now.