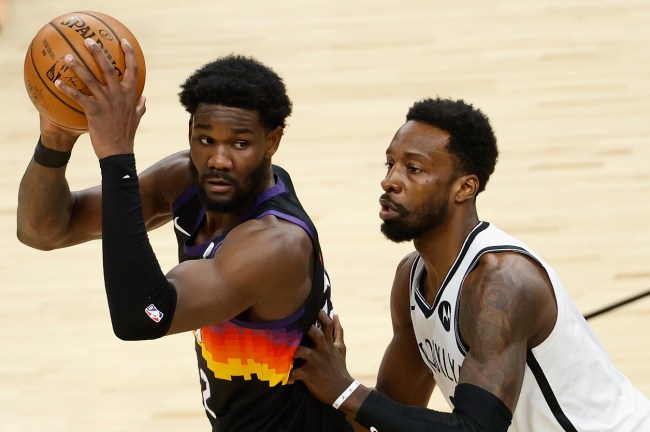 The NBA just never stops, especially during this time of the year.

Kyrie Irving is a hot topic, and Kevin Durant’s future with the Brooklyn Nets has become another central talking point. Then, there is Phoenix Suns star Deandre Ayton, who is reportedly headed out of the desert this offseason. The Detroit Pistons were rumored to be a major option to land Ayton.

But, another team has quickly emerged and even passed the Pistons in the latest odds.

The Nets, reportedly, have emerged out of nowhere to land as the second-highest odds to snag Ayton this summer, according to DraftKings odds (h/t Evan Sidery of Basketball News).

This is unbelievable as the @DraftKings odds for Deandre Ayton joining the Nets continues to climb by the minute. Something has to be happening behind the scenes.

The Nets just jumped the Pistons for the second-best odds to land Deandre Ayton on @DraftKings. What is happening right now? Historic odds movement:

This is bizarre, historic, outrageous, unreal; you name it.

When Sidery tweeted that, the Nets went from +4000 to +350 and are right behind the Suns. This is absolute madness, and there must be something going on behind the scenes. There has to. For some comparison, the Suns were pretty far down the list just a few days ago.

Per BetOnline, the odds on Kevin Durant's next team if he leaves Nets:

Worth pointing out that Durant still has four years left on his deal with the Nets.

Oh, and there would HAVE to be more to this if Ayton does indeed go to Brooklyn.

Could Kevin Durant Be Headed To The Suns In A Deandre Ayton Trade?

The rumors have swirled about Durant, including Portland Trail Blazers star Damian Lillard posting an interesting photo on Instagram.

If Ayton is headed to the Nets, Durant would likely be coming to Phoenix in a deal. Or, at least, one would think.

That move would throw a massive wrench in the entire NBA, and the loaded Western Conference would get even more talented — and we still don’t know where Kyrie Irving ends up.

Imagine how incredible the Pacific Divison would be next season, if the dominoes fall into place like this:

All in all, buckle up for a glorious, whacky ride of NBA rumors and trades.