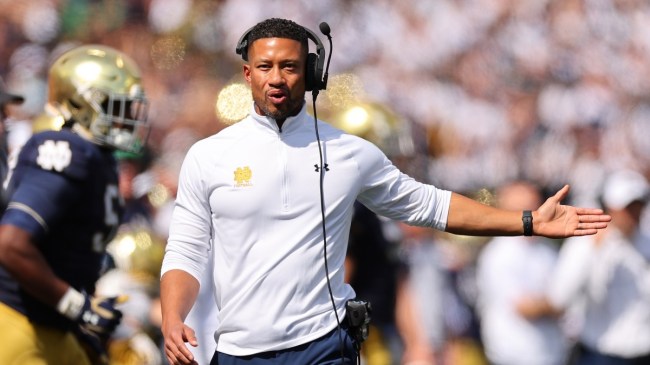 All offseason, Notre Dame fans loved new head coach Marcus Freeman. After all, while Brian Kelly wins a lot of football games, he’s not exactly the most likable guy. Plus, Freeman was recruiting at a level the Irish have not seen in the modern recruiting era. Even after their loss to Ohio State, 21-10 in the ‘Shoe. But, that changed today as Notre Dame lost 26-23 to Marshall at home with a fourth-quarter meltdown.

Notre Dame totally melted down in the fourth quarter

It’s not as if the Irish played well in the other three quarters. But, it was good enough to give them a slim 15-12 lead heading to the final frame.  The Irish defense, which was great a week ago, allowed a long touchdown drive for Marshall to take the lead at 19-15 with 5:32 left . . But, what really did the Irish in was two dreadful interceptions by first-year starter Tylor Buchner. The first of which was taken back for a pick-six, and the second was one of the worst throws you will see all year.

STEVE GILMORE, THE BROTHER OF @BumpNrunGilm0re, WITH THE PICK SIX TO PUT MARSHALL UP 26-15 WITH 4:35 LEFT!!! pic.twitter.com/IEkUeolJTq

Excuse my french, but this throw is so bad you have to see it.

Notre Dame fans are beside themselves

The Notre Dame message boards and twitter-verse are in shambles, obviously.

@JoeCahlo is not buying the Marcus Freeman hype anymore, clearly

Words don’t describe how pathetic this program is currently.

Some think Freeman should be fired already

This Irish fan has a pretty strange palate cleanser for watching that game.

I’m so disgusted by the #NotreDame game that I have to watch The Water Boy on TNT to save my weekend. Also, Michael Mayer Stop eating donuts 🍩 and stay on your feet. #FightingIrish

The rest of the college football world rejoices

It’s no secret that Notre Dame is not well-liked by most college football fans due to perceived preferential treatment within the sport. Naturally, people are rejoicing on Twitter.

I’m not sure if this is an official holiday, but many fans nationwide will be celebrating anyways.

@Slance5289 points out just how much trash talking Irish fans did over the offseason about Notre Dame’s recruiting prowess.

It seems as if the grass may not have been greener for the Notre Dame football program when Brian Kelly left for LSU.