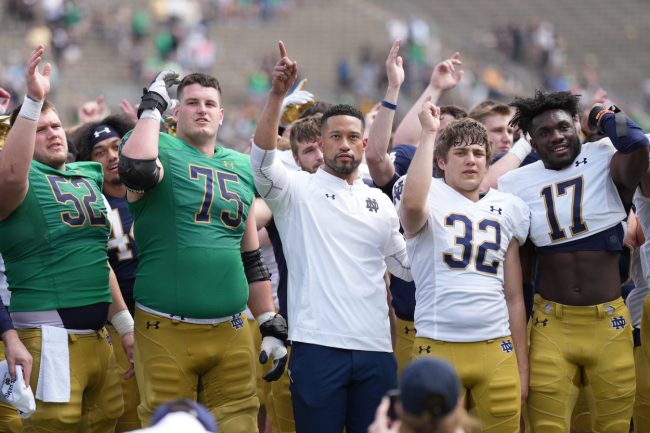 Things are looking up for Notre Dame under new head coach Marcus Freeman. The Fighting Irish are the toast of the town when it comes to conference realignment. It appears as if the powerhouse will either join the Big Ten or receive an absolutely massive payday to avoid to doing so.

Freeman is also killing it on the recruiting trail. Notre Dame currently boasts the country’s No. 2-ranked recruiting class according to 247Sports. The Fighting Irish are also building their 2024 class already, anchored by CJ Carr. The grandson of former Michigan Wolverines coach Lloyd Carr, CJ spurned the home state team in favor of Notre Dame.

But what about this year’s team?

Well, the Irish return a significant chunk of a team that went 11-2 in 2021 and just narrowly lost to Oklahoma State in the Fiesta Bowl. Quarterback Drew Pyne looks the favorite to step in for Jack Coan, who has since graduated. While Michael Mayer may well be the best tight end in the country.

Notre Dame is set to take on BYU in its fifth game of the season on Oct. 8. The game is part of the program’s Shamrock Series, which began in 2009 as a way to give athletes the chance to play in non-traditional stadiums. This year, that game will take place at Allegiant Stadium in Las Vegas.

And the Irish had a hilarious way to reveal their jerseys for the game.

Some guys CAN handle Vegas

Yup, that’s Freeman and a bunch of players and coaches re-enacting the famous Ken Jeong scene from the 2009 hit move The Hangover. Fans absolutely loved the idea.

I love this so much 😭😭😭 never in my life would I think project pat would be played on anything ND related. They forced us to listen to Sweet Caroline during warm ups 🙃. The growth 🤌🏾 https://t.co/p6qF2Fj0BZ

This is absolutely tremendous! https://t.co/bkbwlMPL5d

The jerseys themselves, which are all white with gold accents, went over pretty well too.

Hey @UnderArmour when can we buy the @NDFootball #ShamrockSeries jerseys? And the @Marcus_Freeman1 collection? Take my money!

This is the most over the top, over blown jersey reveal I have ever seen…I and I absolutely loved it! I watched every moment generally excited for the reveal. I do not like ND, but will be watching the game to see the uni’s! @NDFootball @NDFootballPR https://t.co/7khQgSfsct

Yeah, it’s a pretty good time to be a fan of Notre Dame.