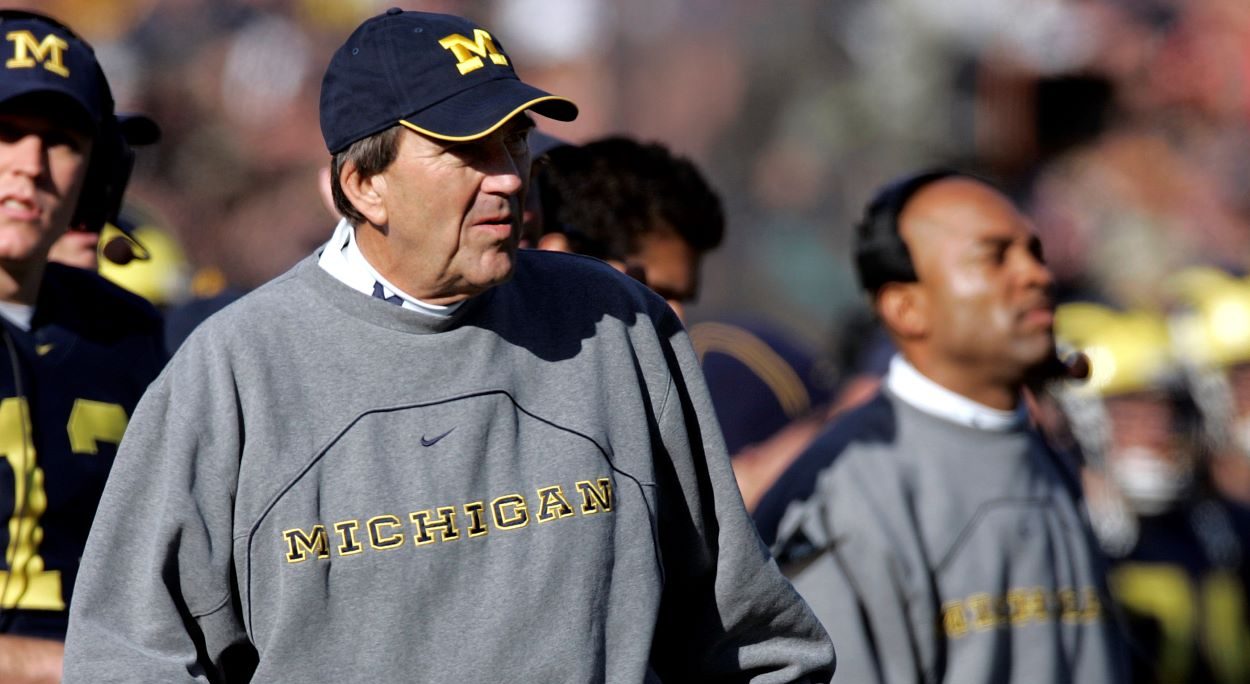 There is no such thing as a “sure thing” when it comes to college sports recruiting.

Whether it’s 2022 No.1 overall recruit Travis Hunter picking Jackson State over Florida State, or Quinn Ewers flipping from Texas to Ohio State, reclassifying, then transferring back to Texas, recruiting is almost always a bit messy.

But Jim Harbaugh and Michigan seemed to have a layup they could not possibly miss.

Carr is a 5-star quarterback in the class of 2024 and goes to high school just 20 minutes from the Wolverines’ campus. But more than that, Carr is the grandson of legendary Michigan coach Lloyd Carr.

Lloyd coached the Wolverines from 1995-2007, winning the program’s last national title in 2007. CJ, unsurprisingly, grew up a huge fan of the Wolverines.

Though when he announced his commitment on Thursday night, it wasn’t to Michigan but rather to…Notre Dame?

You heard that right. Carr spurned the Wolverines for the rival Fighting Irish and Michigan fans were not happy.

“Alexa, show me the most offensive photo on Earth”#spon #ad pic.twitter.com/O5dMS8YOhI

Michigan dropped the ball with CJ. They assumed they had him in the bag. Kids want to feel wanted.

This has to do with his parents not wanting him to play for Harbaugh. A kid that grew up rooting for Michigan (I’d hope) doesn’t wanna go to Michigan? Instead goes to a team that nearly every Michigan fan hates? Very interesting.Good luck to him, hope he loses every game he plays

Are either of those two going to stay at Michigan though? That’s the question. And it seems to me Lloyd Carr is a turncoat. I know he doesn’t make decisions for his grandson, but come on now he had to have a little say so in this.

Notre Dame fans, on the other hand, were ecstatic.

Got ‘em Coach!
5🌟QB CJ Carr commits to Notre Dame!
This is huge! ND has been “a QB away” too often in recent years. Let’s all watch CJ kick that idea like a bad habit, or kick it like…a Michigan offer. Let’s go!!!#GoIrish #WeAreND #NDFB pic.twitter.com/dhE6o6BayM

It’s honestly so refreshing to see an elite recruit lock in and commit early to start building recruiting classes around him and lead, especially when you’re an elite quarterback nowadays. Program changer coming to South Bend. CJ Carr is that guy.

Huge get! Marcus Freeman is killing it on the recruiting trail! Go IRISH!! ☘️ https://t.co/6AcmfyPzMW

Rest assured the vibes in South Bend will be a little bit better than those in Ann Arbor tonight.