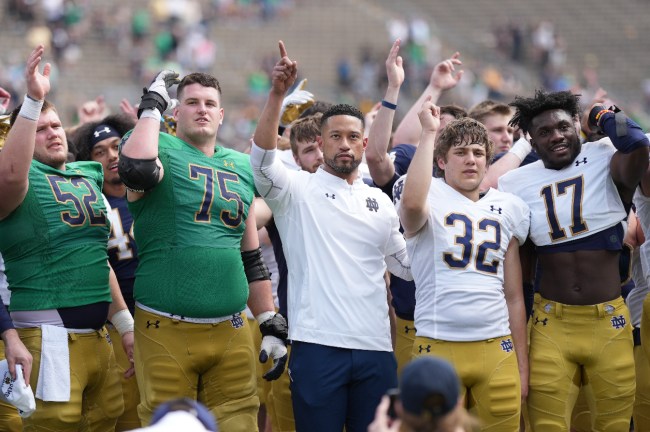 The Big Ten just shook up the entire college sports world by bringing over both USC and UCLA. The Big 12 and Pac-12 remain a mystery, and the SEC is already getting both Texas and Oklahoma.

The Big Ten reportedly doesn’t want Oregon and Washington and are holding out hopes for Notre Dame to come over. The Fighting Irish would add a massive wrinkle to the Big Ten, a conference loaded with talent.

However, Notre Dame has other plans, and a new report has the Irish wanting a ton of money to remain independent. Here is the report from Dennis Dodd of CBS:

Notre Dame would remain independent if it can earn at least $75 million annually in media rights revenue from current broadcast partner NBC, sources told CBS Sports. The Fighting Irish’s deal with the network is set to expire in 2025.

So, that is what it would take for the Irish to remain independent. NBC has been the shareholder for Notre Dame games for over 30 years, so letting them go right now seems like a puzzling decision — if that is what they decide to do.

But $75 million ANNUALLY is a ton of money to lock in Notre Dame, and the Irish leaving and joining the Big Ten would likely earn them at least that much. So, everybody waits on Notre Dame’s decision.