Nick Saban Tells Boosters, Media To Chill Out Ahead Of Season Opener 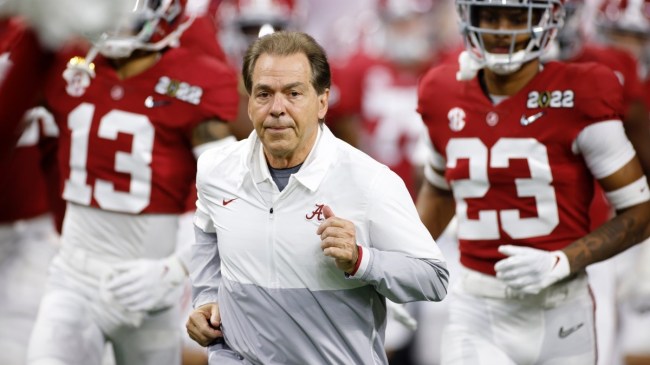 Alabama coach Nick Saban is in midseason form when it comes to complaining about things being said about his team by the media and fans. The 70-year-old coach has often said that outside attention and talk are akin to “rat poison” for his football teams. Usually, he waits till midseason to chastize the outside world, but not this year.

Nick Saban was pretty fired up

Saban was fired up at his first weekly radio show. The seven-time national champion was not happy with fans and the media talking about future Alabama games instead of focusing on week one opponent Utah State.

Saban may have been referring to Alabama’s week two game where the Tide will play a rare true-road nonconference game against the Texas Longhorns. Alabama is currently a 17.5-point favorite against Texas in most sportsbooks. Texas, led by coach Steve Sarkisian, is coming off a disappointing 5-7 season. They’ve brought in uber-recruit Quinn Ewers as a transfer quarterback, and he was named the starter last week. Their game against the Crimson Tide will be a great chance to prove Texas is truly back.

Saban knows he has a good team

Last year, Alabama finished as the runners-up to Georgia in a game where superstar receiver Jameson Williams tore his ACL.  It was not a dominant Crimson Tide team all year, and they were dead to rights against Auburn before  Heisman winner Bryce Young pulled it out. Saban alluded to last year being a rebuilding year This year, they return a lot more talent than a year ago, including Young and the best player in college football, pass rusher Will Anderson.

Saban isn’t the only one who knows how good the Tide could be this year. According to ESPN, Alabama is the third biggest title favorite in the last 20 years.

Unfortunately for the Tide, the two teams in that timespan that had better odds than Alabama both lost in the national title game. USC lost one of college football’s iconic games to Texas in 2005, and Alabama got blown out by Trevor Lawrence and Clemson.