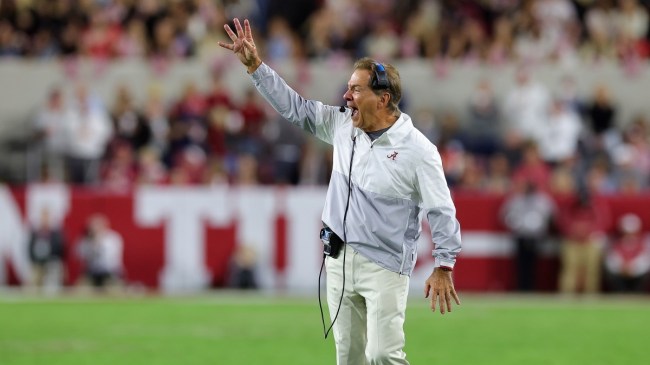 It’s no secret that Nick Saban is a great football coach. The seven-time national championship-winning coach may just go down as the best to ever walk the sidelines in college football history. He is undoubtedly the best coach of this generation, and his impact on the game will be felt forever.

But, on Saturday, his Alabama Crimson Tide were in serious trouble. Clinging to a 24-20 lead, they had allowed Texas A&M inside the five-yard-line with one play with three seconds remaining. But, Alabama got the stop and kept their undefeated season alive. Here, Saban breaks down the play in a must-see clip that will change how you think about football.

Saban broke down the play on his weekly breakdown show.

You’ve gotta watch this. He seemingly knew precisely what the Aggies would do and had his players in the perfect position.

Wow. To be able to pick up on all of the intricacies in real-time and have your defense set absolutely perfect for what might be the biggest play of the season is incredible.

They had to be ready for so many things if their read on what the play would be wasn’t right, too. Dropping the defensive lineman out to spy on Aggie quarterback Haynes King was a stroke of genius. And, they played the correct leverage on every route. Many said the play didn’t have a chance because it was a bad call by Jimbo Fisher. But, it may be more likely that Alabama was just set up perfectly.

the Crimson Tide will head to Tennessee this upcoming weekend in a battle of undefeated, top-ten teams.