Italian Shot Putter Nick Ponzio Is Your New Favorite Athlete, And You Probably Never Even Knew He Existed 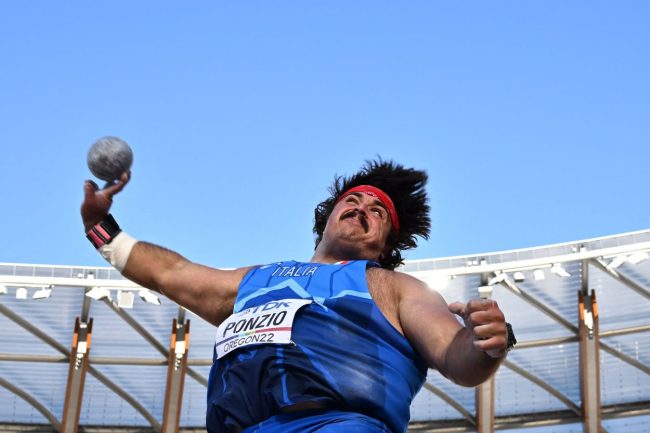 If sports are meant to be a form of entertainment, there is perhaps no greater athlete in the world right now than Nick Ponzio.

Who is Nick Ponzio? We’re glad you asked.

Ponzio is a 27-year-old American-born shot putter who represents Italy at the world level. He’s never won a world medal, but he’s still undoubtedly the most-interesting thrower out there. Just check out this entrance from the 2022 World Athletic Championships in Eugene, Oregon.

As cool as the other side of the pillow.

Nick Ponzio Is The Best Showman In Track And Field Today

Ponzio didn’t medal. In fact, he took ninth in the event with Americans Ryan Crouser, Joe Kovacs and Josh Awotunde sweeping the podium. But it was still Ponzio who stole the show. And that’s nothing new for the University of Florida and USC product. Ponzio prides himself on putting on a show every time he goes out to compete.

“Being a performer, an entertainer, a big part of it is wanting people to talk about what I’m doing,” he said in an interview with WorldAthletics.org. “That’s why I wear a fanny pack when I throw, headbands, and why I have this sweet rocking moustache. It’s about going into these meets being prepared physically to do my job, but also (make the crowd say), ‘what’s that guy doing?’”

Ponzio made the decision to represent Italy due to his parents, who are both Italian, one Neapolitan and the other Sicilian.

“I’m born and raised in America but we have thick Italian culture and Italy has one of the richest cultures in the world,” he said in the same interview. “I always thought it’d be a cool thing to do, because it’s so competitive in the US but also because it brings me just as much pride to represent Italy as it would America.”

After making the switch to represent Italy, Ponzio was all set to compete in the Tokyo Olympics. Unfortunately, a freak knee injury limited his chances and he wound up eliminated in the qualification rounds.

Now Ponzio is back, ‘stache and all, and he’s better than ever.