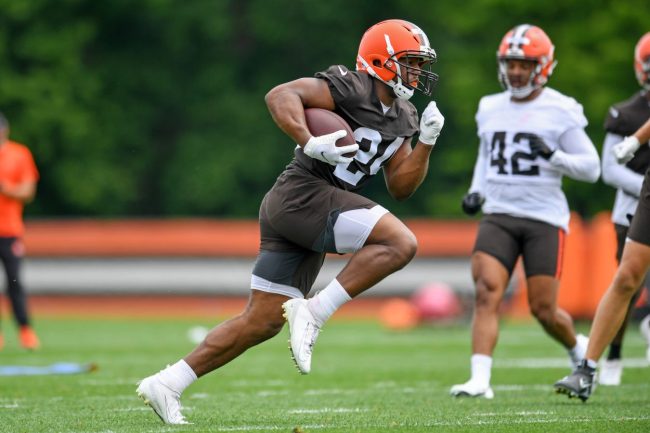 Cleveland Browns running back Nick Chubb’s feats of strength are the stuff of legend.  Chubb broke the Georgia state power clean record by lifting 395 pounds in 2014 at the age of 18. Not one to leave anything on the table, he also squatted an unreal 645 pounds and put up 390 on the bench. A couple months ago, he captivated the entire NFL world with an absolutely unreal squat.

Now he’s back at it in the weight now, and it’s even more insane.

Chubb, who stands at 5-foot-11 and 227 pounds according to his Cleveland Browns profile, was back at his native Cedartown High School in Georgia. While there, Chubb decided to get a little lift in. And when we say little, we mean absolutely preposterously large.

The three-time NFL Pro Bowler and 2021 Pro Football Writers of American first-team All-Pro squatted an unreal 610 pounds for two reps. He did so while using a bar meant to flex, making the lift even more difficult.

But that’s not all. Earlier in the week Chubb took to Instagram to post a video of him power cleaning a whopping 405 pounds for reps.

Chubb’s working out alongside current Cedartown players, who looked on in disbelief as the NFL star casually tossed around preposterous amounts of weight. Football fans on Twitter couldn’t believe what they were watching.

I can’t really explain to you how goddamn strong this is https://t.co/R3vPBF3bss

Other things that weigh about 600 pounds

bonkers. fairly certain we didn’t have this much total weight in my high school gym. had a hell of an orchestra though https://t.co/GCxRG9rwlu

To any defensive player that was thinking about taking on Chubb in the open field in 2022, you might want to rethink that. And to EA Sports Madden NFL 23, who gave Chubb an 85 strength rating in the upcoming game, maybe recalculate on that one as well.