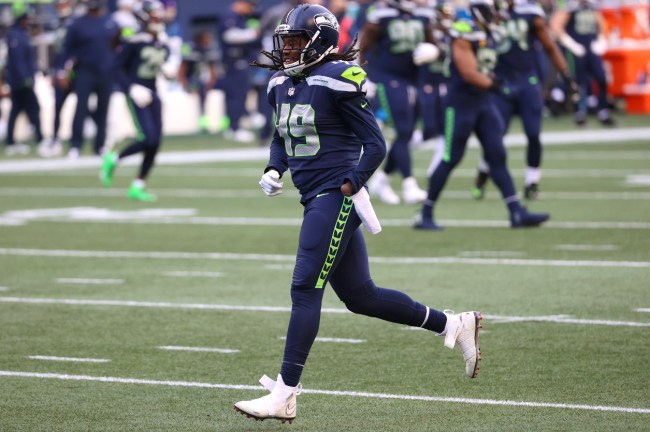 Shaquem Griffin played college football at the University of Central Florida with his twin brother, Shaquill. Both players had NFL buzz, and Shaquill is a member of the Jacksonville Jaguars even to this day.

Shaquem, however, also had a more difficult path after having his hand amputated as a child. Yet, he defied the odds, made the NFL, and enjoyed a decent career with the Seattle Seahawks.

On Wednesday, Shaquem Griffin announced his retirement from the NFL in a Player’s Tribune post.

Shaquem Griffin has announced his retirement after four seasons in @PlayersTribune.

The first one-handed player drafted in the modern NFL.

Griffin has been an inspiration to everybody, and he will be remembered forever for his courage and relentless work ethic.

NFL fans from all over reacted to the news of Griffin’s retirement.

Shaquem Griffin showed the world anything is possible at the 2018 Combine.

Absolute goat. Forever a knight. One of my favorite athletes ever. We’ll always love you Shaquem and you’re welcome in the bounce house any time. https://t.co/rqvRxTTg8o

Beautiful. Can’t wait for your next act in Plan A, @Shaquemgriffin. https://t.co/JvTnuySUeD

Don’t care what nobody says this man @Shaquemgriffin just made a generation of kids suffering from any rare disease dreams come true making anything possible and that what really counts . 🐐 https://t.co/kURjoMMzPo

Griffin spent some time with the Miami Dolphins last summer but did not make the final roster, so he had been searching for a team since then.

Nonetheless, Shaquem Griffin is headed to the next chapter of his life and he seems content with his decision. Hats off to an improbable career for Griffin.