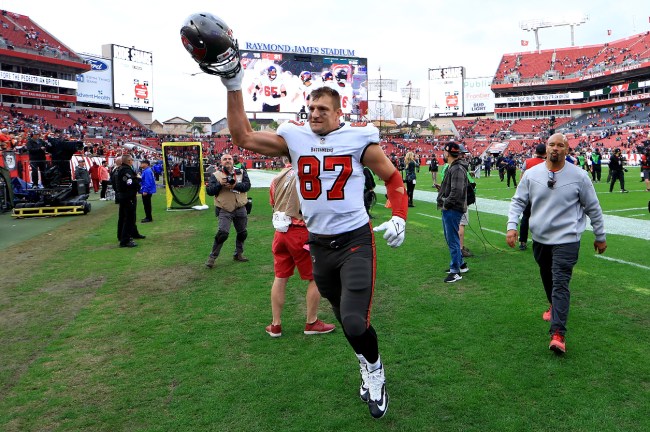 There it is. The moment everybody has been anxiously waiting for.

An all-time great officially hangs em up at 33 years old.

After Tom Brady retired and then unretired, everybody was waiting to see if Gronk would run it back for one more year with Brady and the Bucs.

But he doesn’t appear to want to play anymore, although we have seen Gronkowski retire and return before.

Here’s the announcement from the man himself via his Instagram page.

The NFL World Reacts To The Retirement Of Rob Gronkowski

The news triggered a ton of NFL fans, and a lot paid respect to one of the greatest all-time at the tight end position.

The GOAT of all TE’s. No one comes close

Best ever when he retired the first time. Even better after retiring the second. No player has ever been more difficult to guard than Gronk, and no one ever will. He and Tom will always be my two favorite players. Love you Gronk. See you in Canton! https://t.co/uX9cHp450t

One of the greatest tight ends in NFL history is retiring after 11 seasons with the @Patriots and @Buccaneers#Patriots #Buccaneers #ForeverNE #GoBucs https://t.co/T89KQT7UzV

On the other hand, some are expecting Gronk to return to NFL again, just like the last time he announced his retirement.

Greatest TE to ever do it but Brady will have him back by week 5 https://t.co/lvSD7pm5ey

I wonder how long before he unretires again? https://t.co/W64BVb5e9g

He just dont wanna go thru training camp lol. He’ll be out there week 1

we’re not falling for this again 🥸

Bro pulling a Brady he’ll be back in a week

Just doesn’t want to deal with training camp. He’ll have a “change of heart” in September.

When he sees Tom brady playing week 1 he gonna comeback

For now, Gronkowski is headed for retirement, although nobody would be surprised to see him back on the field at some point, and his agent even hinted at that possibility.

In reaction to Rob Gronkowski’s news, his agent Drew Rosenhaus texts: “It would not surprise me if Tom Brady calls him during the season to come back and Rob answers the call. This is just my opinion but I wouldn’t be surprised if Rob comes back during the season or next season.”