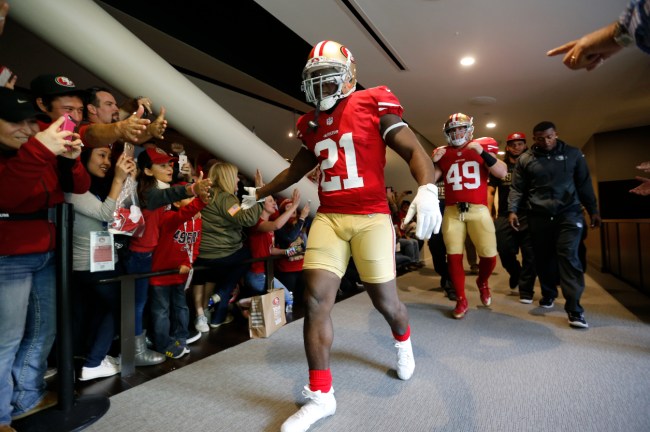 Frank Gore has officially retired from the NFL. The longtime running back is finally hanging up the cleats after an impressive career. According to Cam Inman of The Mercury News, Gore is signing a one-day contract in order to retire as a member of the San Francisco 49ers.

Gore’s carer ends with a long list of accolades. He finishes as the 49ers leading rusher in franchise history and rocks a ton of other accomplishments:

Gore’s Hall of Fame resume should be a no-brainer decision for the voters, and the #21 jersey should be retired in the Bay Area.

NFL fans react to the retirement of Frank Gore

After a 16-year career, Gore is done in the NFL. As such, NFL fans everywhere came to pay respects to Gore on a successful tenure.

Frank Gore was my favorite running back growing up. A true inspirational story. 214ever!

Thank you for everything you have done for us @frankgore. Greatest thing to see you retire a niner. You were always my favorite player.

49ers fans are going to need to get used to seeing Gore away from the NFL, and after everything he did for that franchise, he is finishing his career on the perfect note.

Before I even knew my granddad was a 49ers fans Frank Gore & Patrick Willis made me love this team. https://t.co/PRPZ7j3Rug

I didn’t realize I was scheduled to cry today. I’ll be sure to set time aside.

Love ya, @frankgore.
Congratulations and thank you for everything! Go Niners ❤️💛 https://t.co/QsVTHfT512

One of the best representations of the 49ers ever. Class act all the way. Next stop, HOF. @frankgore #49ers #FTTB https://t.co/QS94RDKdL7

The next stop for Frank Gore? It has to be Canton, Ohio, where his Hall of Fame should already be ready to go.