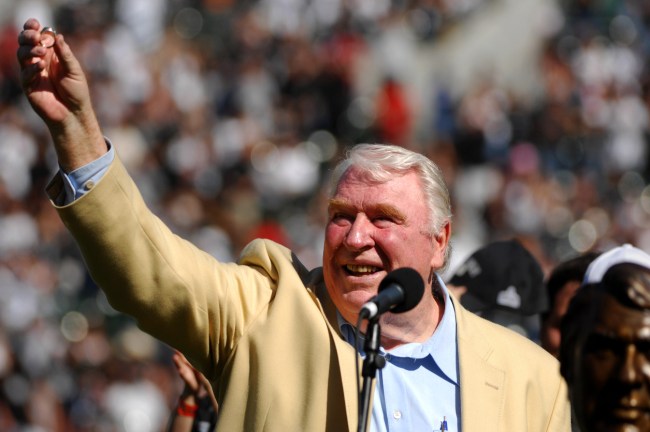 Was this really a tough choice?

The Madden 23 cover was released on Wednesday morning, and John Madden appeared on it. The late NFL legend left a long legacy both on and off the field, on the sidelines and in the booth, and now he will be back on the cover of his video game for the first time since 2000.

The legendary John Madden returns to the cover #Madden23 pic.twitter.com/unfWPYV6KD

Discussions circulated about which player should appear in the game. But, it always felt as if Madden himself should have been the choice — and indeed he is.

It has been a long time since Madden appeared on the front of the video game, and here’s what it looked like back at the turn of the century compared to the one now.

JUST IN: 34 years to the day that John Madden’s video game was launched on the Apple II, EA Sports announces that Madden will once again grace the game’s cover.

Last on the cover in Madden 2000 (which came out in ‘99), the game franchise has sold 150 million copies. pic.twitter.com/mW4rYXQK7F

Just a fantastic decision by the company to honor John Madden, and this went over incredibly well with the fans.

Great tribute! Captures everything about John

The new cover is a smashing hit, although a ton of fans are hoping the actual gameplay itself is different than it has been in the past.

For some perspective, here are the last 34 years worth of covers, and the way it has changed is marvelous to see.

Which cover is your favorite? pic.twitter.com/HShhv3NLdk

Nonetheless, this was the right call all the way by EA Sports and a perfect way to honor the legendary John Madden. The words “Thanks, Coach” add another perfect touch on the cover, and bringing back the photo from 2000 is another wonderful idea.

Just an all-time classy move by the company.