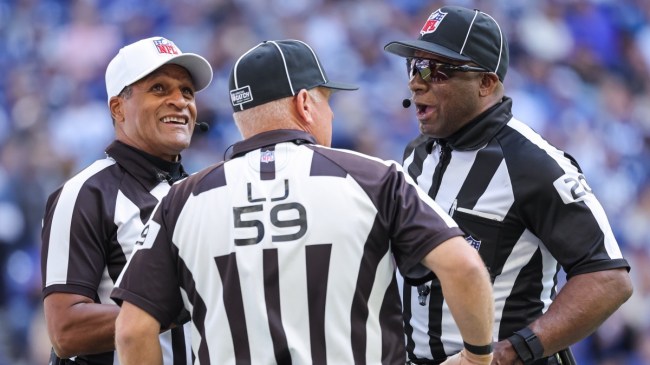 Being a referee in the NFL is quite an accomplishment. There are around 120 referees leaguewide, and they’ve all had to climb up the ranks of high school, small college, large college and then the NFL. They’re paid well, too. The average official makes $205,000, according to USA Today. That’s not bad for 18 regular season games.

Of course, they have to follow some rules. Aside from the obvious fact they can’t be biased toward certain teams or players, they definitely cannot seek out autographs, pictures, etc. There was a serious breach of that protocol in Sunday’s Tampa Bay Bucaneers-Carolina Panthers game.

Players were seen signing autographs for referees after the game

Following the Panthers’ 21-3 shock win over the Bucs, a video surfaced of an embarrassing situation involving members of the Bucs and the refs.

Look, we are all football fans. But autograph seeking, even if in the tunnel, cannot be tolerated. SJ Jeff Lamberth (21st season) and LJ Tripp Sutter (4) know better. This may be the last season for Lamberth, but that's no excuse to cross a line like thispic.twitter.com/CboOAH3Jr8

Yikes, that is a terrible look for everyone involved, including the players.

People are pretty upset about this, as they should be.

Even in the scenario below, this is not the way to go about it.

This can’t happen unless they’re getting it for a handicapped kid out something like that. Horrible look!

But, there are other theories on what was going on.

I’m certain we will hear more about this. It may be a nothingburger. But, if they were indeed asking for autographs, there will be negative repercussions.