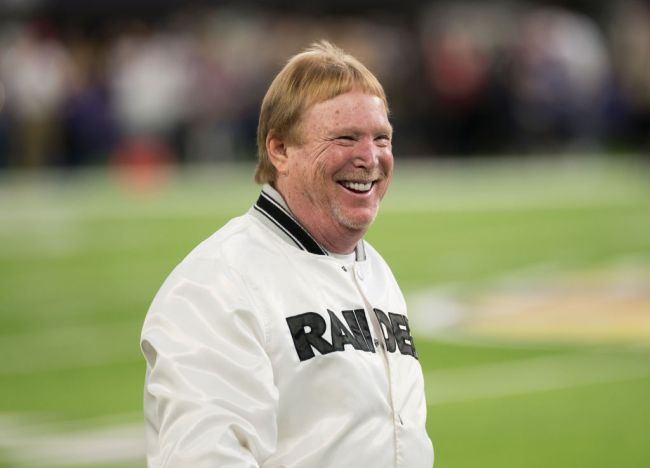 The 2022 NFL pre-season kicked off on Thursday night and no one seemed to be enjoying the return of football more than Raiders owner Mark Davis.

The Las Vegas Raiders and Jacksonville Jaguars met in Canton, Ohio for the annual Pro Football Hall of Fame Game and it turned out to be a rather expected one-sided affair. But who cares? Football is back!

Raider Nation got a first look at newly-acquired wide receiver Davante Adams in the silver and black. Although he and quarterback Derek Carr remained on the sidelines. Even so, the Raiders took a 20-0 lead by halftime.

Then came the most memorable moment of the night as the camera panned over to Raiders owner Mark Davis absolutely demolishing some chicken wings.

Football is back! #Raiders owner Mark Davis eating chicken wings and watching his team blast the Jaguars 20-0 in the third quarter.

Good for MD. The NFL owner most like the average fan. That's why #RaiderNation loves him. pic.twitter.com/WtTDKFibbP

The season was off to a great start, so Davis had every reason to be enjoying himself. And clearly, the Raiders owner enjoys a good flat as much as the next guy. Let’s just hope he didn’t stain that white shirt.

With Davis proving that he’s just like any other football fan, the internet was loving it.

Mark Davis was killin’ those wings! I ain’t mad at him. I’m hungry now. 😂#HallofFameGame

Elon Musk would be 20x more likeable as a billionaire if he just did normie billionaire things like eat chicken wings in his owners suite like Mark Davis pic.twitter.com/AiCXmP2dzn

Football and chicken wings? Sounds like a perfect match. The same can’t be said for the all-white shirt though.

I want the confidence Mark Davis has eating wings dressed in all white. #HOFGame

It was a tough night for the Jacksonville Jaguars who were without star quarterback Trevor Lawrence and running back Travis Etienne. Their only endzone trip came with three minutes remaining in the 4th quarter.

The Raiders eased up in the second half, going on to defeat the Jaguars 27-11. Football is finally back! That means there’s a whole season ahead for Mark Davis and football fans everywhere to keep crushing wings.