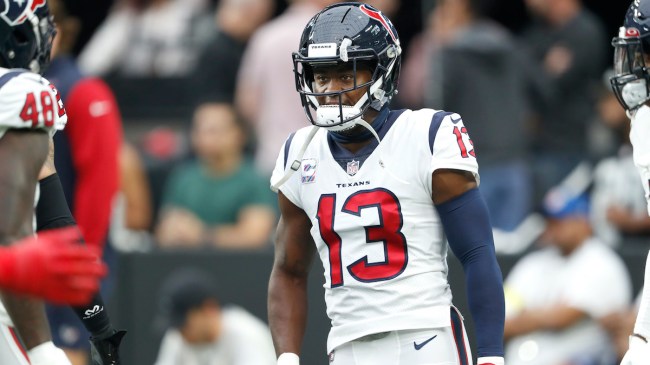 Trade news flooded the football world ahead of the NFL trade deadline on Tuesday, but one surprising name missing from the headlines was Houston Texans WR Brandin Cooks.

With a single win through eight weeks, there’s no denying that the Texans are struggling this season. Only the Detroit Lions have a worse record so far. In other words, the playoffs are essentially out of the picture.

It’d seem a good time for the Texans to look ahead for a rebuild at this point in the season. There was certainly speculation in recent weeks that Cooks would be moved to a playoff contender in return for future draft picks.

However, the trade deadline came and went on Tuesday without a deal coming to fruition.

No trade for #Texans WR Brandin Cooks, source said. There were talks. But nothing came of it.

In the weeks leading up to the NFL trade deadline, it appeared several teams were interested in acquiring the Cook from the Texans. His own Twitter likes even included hints at rumored moves to the Cowboys, Rams, and Vikings.

So the fact that no deal went through came as a surprise to football fans, reporters, and even the wide receiver himself. It seems he’s not exactly happy with the situation either.

In response to the deadline passing, Cooks sent out a cryptic tweet seemingly aimed at the Texans organization.

Don’t take a man’s kindness for granted. Covered for the lies for too long those days are done. Crossed the line with playing with my career 🏹

Cook’s frustrations are certainly understandable. His production this season has taken a dip as a result of the Texans’ offensive struggles. He’s averaging just over 50 yards per game with only one touchdown through seven games. It’s not an ideal stat line for a potential WR1.

Despite the performance this year, Cooks has generally offered consistent production wherever he lands. He’s recorded 1,000+ receiving yards in six seasons with the Saints, Patriots, Rams, and Texans.

Even still, it wasn’t enough for a team to pull the trigger on a trade. Later reports revealed the Dallas Cowboys were in serious talks, but the $18 million guarantee on his contract proved too costly.

The Cowboys and Texans were discussing a deal to send WR Brandin Cooks to Dallas, per sources. And the sides were in the neighborhood on comp. Cooks’ $18 million guarantee for 2023 was the dealbreaker here.

The season isn’t likely to get any better for Cooks while he waits until the Texans can trade him again. After his latest comments, it’s worth keeping track of how he handles his relationship with the team moving forward.

Cooks and the Texans will need to put this behind them quickly if they have any hopes of taking down the undefeated Philadelphia Eagles on Thursday.