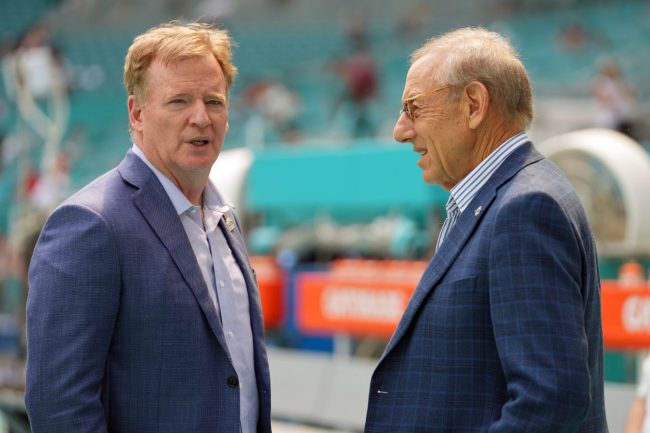 Perhaps the NBA and Adam Silver could learn a thing or two from the NFL and Roger Goodell.

Silver and the league and currently in the midst of investigations into both the Philadelphia 76ers and the New York Knicks for tampering in the offseason. Most fans that both teams will get off lightly, as is usual in the NBA with tampering cases.

But apparently the NFL doesn’t take the issue quite so lightly.

NFL stripped the Dolphins of their 2023 first-round draft pick and 2024 third-round pick for violating the integrity of the game.

The league brought down an absolute sledgehammer on the Miami Dolphins on Tuesday for tampering with then New England Patriots quarterback Tom Brady in the 2019-20 NFL season.

NFL Announces Findings and Discipline Following Independent Investigation of Integrity of the Game Policy Violations by the Miami Dolphins: https://t.co/jvIKaV3EeF

The league then issued the following statement on the incident:

The Dolphins had impermissible communications with quarterback Tom Brady in 2019-20, while he was under contract to the New England Patriots. Those communications began as early as August 2019 and continued throughout the 2019 season and post-season. These numerous and detailed discussions were conducted by Mr. Beal, who in turn kept Mr. Ross and other Dolphins executives informed of his discussions with Mr. Brady.

Goodell also weighed in personally on the investigation and why the punishment was so severe.

Goodell: "Investigators found tampering violations of unprecedented scope and severity. I know of no prior instance of a team violating the prohibition of tampering with both a head coach and star player, to the potential detriment of other clubs, over a period of several years."

Some fans and media were left wondering whether or not Brady will face some sort of punishment for his involvement, as well as what the reasoning could be for letting him off.

The only reasoning that I can see for why Tom Brady will not be suspended himself as well is that perhaps he can argue he was only meeting with Ross to discuss a post-retirement minority ownership stake – NOT a playing opportunity – but man that is the grayest of gray areas.

I would love a good explanation for why Tom Brady isn't being suspended for engaging with Miami.

The three-page report by the league addresses the totality of the findings and punishments, but makes no mention of a suspension or fine for the Tampa Bay quarterback. It also, critically, clears the Dolphins of wrongdoing involving allegations of tanking from former head coach Brian Flores.

Either way, Miami’s penalties are extremely severe and a tough blow for a young, up and coming team.