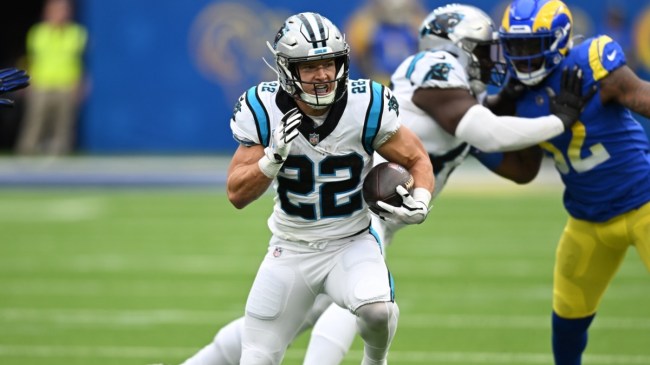 Last week, we wrote about Christian McCaffery being on the trade block. . This comes after a putrid 1-5 start by the Carolina Panthers that had their coach Matt Rhule fired. The organization is in clear rebuild mode.

So, they’re looking to make moves to acquire future draft capital. And, on Thursday, the Panthers did just that.

The first blockbuster deal of this year’s trade deadline is here.

McCaffrey returns to the Bay Area, where he attended Stanford. pic.twitter.com/R474r3eSkv

Wow. What an acquisition for the 49ers. Kyle Shanahan’s offense is always one of the best rushing attacks in the league and now he has one of the most talented zone runners in the league. And, McCaffrey can help them in the pass game, too. Surely they will run some packages where both Deebo Samuel and McCaffrey are in the backfield.

The compensation is pretty steep, though. Especially considering McCaffrey is a running back on a cap-eating deal.

Trade comp: 49ers are sending second-, third- and fourth-round picks in 2023 and a fifth-round pick in 2024 in exchange for RB Christian McCaffrey, sources tell ESPN.

According to Schefter, the 9ers could be generous with picks.

What helped the 49ers pull off the trade for Christian McCaffrey was that they had six extra 3rd-round compensatory draft picks granted to them for losing Robert Saleh to the Jets, Mike McDaniel to the Dolphins and Martin Mayhew to the Commanders in recent off-seasons.

This is quite the big news, and it came during Thursday Night Football, as the Cardinals beat the Saints 42-34.

This gives the 49ers a ton of weapons on offense.

The 49ers are looking LOADED on offense with the addition of Christian McCaffrey 😳 pic.twitter.com/KKS1P4MSIH

It’s going to be fun to watch him in burgundy and gold.

Lord have mercy , the 49ers with Christian McCaffrey is going to be insane ! Sheshhh

Some are loving the trade from the Panthers’ perspective. I can’t really blame them, as they have a big rebuild ahead and that’s a lot of picks to get back.

The Panthers got a good haul. Don’t draft RBs in the 1st if your team doesn’t have a cemented QB in place and/or are not ready to win now. Next season there should only be a handful of teams well suited to handle taking Bijan in the 1st. Think he will definitely go rd 1

I can’t wait to see McCaffrey play as a 9er. Adam Schefter put out a tweet on his timeline for making his San Francisco debut.

49ers' RB Christian McCaffrey is scheduled to fly to San Francisco on Friday, when he will meet his new teammates and begin to learn the new playbook. It will be challenging to have him in uniform Sunday vs. the Chiefs, but McCaffrey did go to Stanford and anything possible.

Hopefully it’s sooner rather than later.