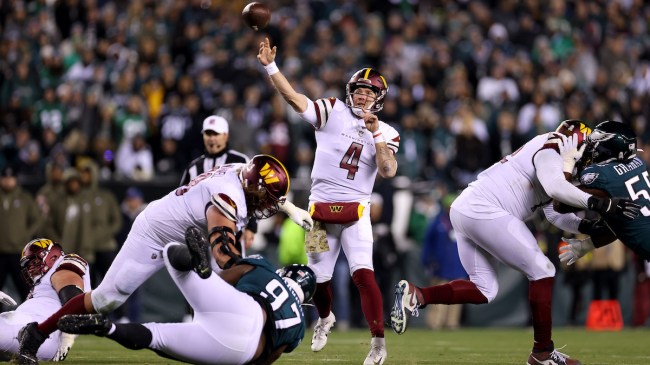 Taylor Heinicke is stepping up big time for the Washington Commanders in place of the injured Carson Wentz. The former undrafted free agent is 3-1 on the season after a stunning win over the previously undefeated Philadelphia Eagles.

It wasn’t an especially stellar performance from Heinicke, but it got the job done. He finished 17-of-29 for 211 yards and capitalized on some uncharacteristic turnovers from the Eagles. He was also involved in a controversial roughing the passer call that allowed the Commanders to run out the clock.

To celebrate the impressive victory, the Commanders took a page out of the Minnesota Vikings’ book. They gave Heinicke his own Kirk Cousins-inspired post-game look for the flight home with chains and glasses all included.

First Kirk Cousins, then Adam Schefter, and now Taylor Heinicke. Who could possibly be next?

While the Commanders QB wasn’t shirtless like the other two, fans were still absolutely loving it.

Even Vikings fans approved since the Eagles’ loss meant the Vikings were now tied for the best record in the NFL.

The cooler packed full of well-deserved drinks was a touch many fans enjoyed as well.

Heinicke’s enthusiastic celebration after being awarded the unnecessary roughness call late in the game even drew comparisons to Cousins’ signature phrase. So the post-game festivities couldn’t be more fitting.

With Wentz eligible to return from IR next week, head coach Ron Rivera has a tough decision ahead. He’ll have to bench a Super Bowl-winning QB that the team traded for or bench the QB that has given the team 3 of its 5 wins this season.

Heinicke has undoubtedly made a strong case to remain the starter after Monday’s victory over the Eagles.