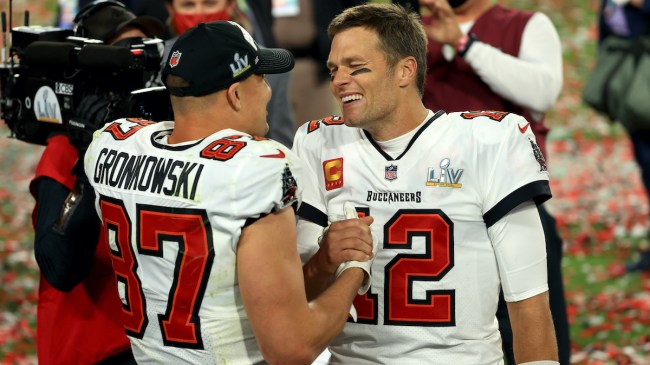 Rob Gronkowski has previously stated that his second retirement from the NFL would be his last. However, Tom Brady’s latest attempt to coax the star tight end into a return sounds mighty convincing.

The Tampa Bay Buccaneers snapped a three-game losing streak in Week 9 by defeating the Los Angeles Rams 16-13. It wasn’t pretty, but a win is a win. With a chance to move atop the NFC South in Week 10, Brady is hoping to bring back his former teammate for some extra help.

The Bucs travel to Germany to face the Seattle Seahawks on Sunday and Brady is using the trip overseas to his advantage. During his “Let’s Go!” podcast on Monday, he shared the hilarious tactic used in an attempt to get Gronk to unretire.

“I’ve heard the only thing you’re allowed to drink on the sideline at these German games is beer. I actually tried for recruit Gronk back just for this game in particular. Hopefully, he goes for it.”

With Sunday’s game being played at the Allianz Arena in Munich, there couldn’t be a more perfect time for Gronk to return for one last game. The Germans love beer and Gronk is a well-known party enthusiast, so it sure sounds like the ideal situation.

Despite taking two tight ends in the 2022 NFL Draft and signing veteran TE Kyle Rudolph, the Buccaneers have seen inconsistency at the position without Gronkowski.

Bucs’ tight ends have 432 total yards combined through 9 games in 2022 and their first touchdown only came last week. In comparison, Gronk finished his 2021 campaign with 802 yards and 6 touchdowns in 12 games.

It’s been a down year for the entire Buccaneers offense. Their ground game has been inconsistent all season and injuries to the receiving corps haven’t helped either. Even still, the team remains in the playoff picture.

Barring a surprise return from Gronkowski, Tom Brady will need to rely on his receivers and rookie TE Cade Otton in Germany on Sunday.