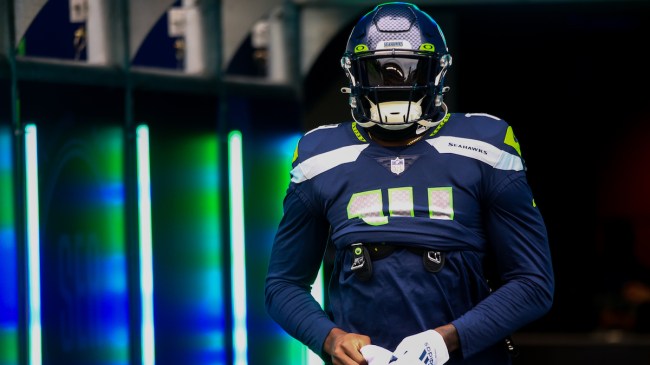 Seattle Seahawks wide receiver DK Metcalf delivered his best receiving performance of the season in Week 4. But fans likely remember his involvement in the high-scoring affair for a very different reason.

Metcalf had a monster outing with 7 receptions for 149 yards against the Detroit Lions. Then he was carted off the field early in the fourth quarter, leaving fans concerned about a potential injury. In reality, the dramatic exit was simply for a bathroom break.

It was much like Paul Pierce’s wheelchair game in the 2008 NBA Finals and the story quickly went viral. Luckily, Metcalf was able to laugh it off shortly after the game.

That clinch walk wouldn’t have made it 😂 https://t.co/tYvaWQSaa6

On Tuesday, Metcalf joined the Up & Adams Show and was asked about the now infamous ‘poop cart’ story. He shared new hilarious details including a bold suggestion from head coach Pete Carroll and how NFL Films captured the whole thing.

“@PeteCarroll wanted me to do it on the sidelines”

Adams was also curious about how the entire situation went down with the team and coaches, which prompted Metcalf to share the entire back story.

“Okay, so this is the full story,” he explained. “So, this is the middle of the drive and I come out for a play and I told my receivers coach, I was like, ‘hey, I gotta go to the bathroom.’ He was like, ‘you gotta pee or do a number two?’ I said, ‘I gotta do a number two.’ And then it went away for ten seconds, so I was like all right I’ll go back into the game.”

“And when I was back in the game the feeling came back up. So we ended up scoring like two plays later and so I run back to the sideline and they had a cart ready for me,” Metcalf continued.

While Metcalf might not have wanted the embarrassment of being carted off to use the bathroom, he eventually realized it was the preferred option over his head coach’s suggestion.

He went on to explain that Carroll’s suggestion was inspired by the Seahawks’ special teams coach. Larry Izzo had received a game ball for pooping on the sidelines when he was with the Patriots.

“So Pete was like, ‘If Larry can do it then you can do it. And I’m like, ‘I’m not Larry. I don’t wanna be like Larry in that aspect,” Metcalf joked.

The best part of it all might be that there’s actually footage and audio of the entire incident happening thanks to NFL Films.

“I was actually mic’d up that game too,” Metcalf admitted. “So this is like, very umm…”

“So NFL Films has full pooping?” Adams interjected to ask.

“Yeah, they got everything,” Metcalf replied slyly.

It’s unclear whether NFL Films will ever release the footage, but we’re betting it’s hilarious. Metcalf later promised to flash a thumps-up if a similar situation ever happens again, so fans wouldn’t need to worry about injuries.

Although, he’s hoping that it was just a one-time experience. That said, it happened in the only game where he broke 100 receiving yards. So perhaps more emergency bathroom breaks could be the secret to helping increase his production for the remainder of the season.