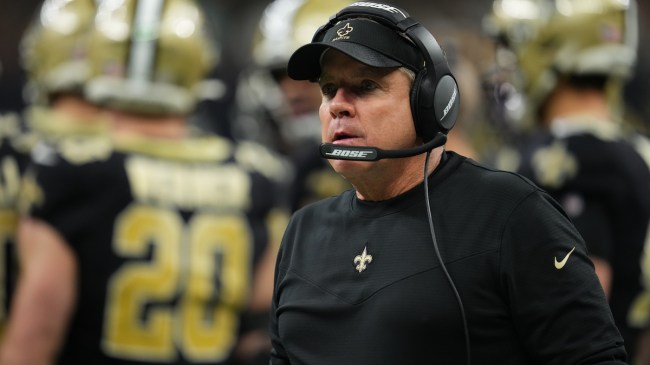 Former Saints head coach Sean Payton has previously expressed his openness to returning to the NFL and it appears there’s one quarterback in particular that he’d be interested in linking up with.

After 16 seasons with the New Orleans Saints, the Super Bowl XLIV-winning coach made the surprising decision to resign in January 2021. Despite joining FOX Sports as a studio analyst for the 2022 season, Payton’s name still keeps floating around as a potential hire back in the NFL.

Payton joined Monday Night Football’s ManningCast as the final guest of the evening and only added fuel to the fire. With the Ravens playing the Saints, the former longtime head coach shared some particularly notable praise for Lamar Jackson.

.@SeanPayton has always been a big Lamar Jackson fan 😅

Jackson is set to enter free agency in 2023 after contract negotiations came to a standstill with the Ravens. The 2019 NFL MVP is reportedly seeking a fully guaranteed deal but the team has yet to offer such.

With Jackson possibly fielding offers from other teams following the 2022 season, Payton hinted that the timing couldn’t work out any better for his potential return.

The former Saints head coach previously stated his interest in returning for 2023 under the right situation. He later clarified that the ownership and front office were important, but it seems Jackson could be another motivating factor.

Unfortunately, Payton isn’t actually a true free-agent coach next year. He remains under contract with the Saints through 2024, so teams would need to offer compensation to bring him in. It’s an unlikely scenario, especially since the team would need to give Jackson a massive contract first.

Eli Manning also tried his best to get a direct answer about Payton’s future plans, but it was to no avail.

Given the recent news around the Indianapolis Colts head coaching position, Payton couldn’t help teasing the other Manning brother about potentially turning down the job. He did eventually answer the question though and revealed he’s quite content with Fox at the moment.

Jackson’s freak athleticism and Payton’s spectacular football IQ would be a dangerous pairing. Luckily for NFL defenses, it appears a link-up in 2023 probably isn’t going to happen.

However, we didn’t expect the Colts to name a head coach with no prior NFL or college coaching experience. So anything is certainly possible in the NFL this year.