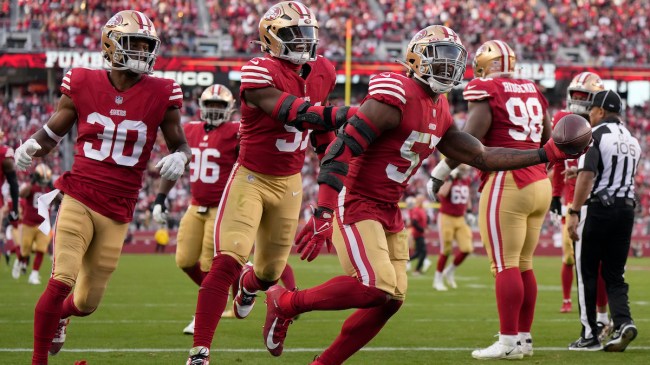 The San Francisco 49ers’ defense has become an absolute nightmare for NFL offenses over the last month and the stats simply don’t lie.

The Niners shut out the New Orleans Saints 13-0 on Sunday and their defense dominated from the get-go. LB Fred Warner forced a fumble from Alvin Kamara on the opening drive, but that was only the start. They held the Saints to 63 total rushing yards and made two key stops near the goal line in the fourth quarter.

By keeping the Saints scoreless, the 49ers actually ended the NFL’s longest active scoring streak at 332 games. The Saints hadn’t been shut out since 2002, which just so happened to also be against the Niners.

The last 4 times the Saints have been shut out 🤯

It seems the 49ers just have the Saints’ number. New Orleans’ last four shutouts have all come at the hands of San Francisco.

While Sunday’s result brought an end to the Saints’ streak, it actually extended an impressive streak for the Niners’ defense. After keeping the Arizona Cardinals scoreless in the second half last week, they’ve now gone 94 straight minutes without allowing a score.

Perhaps what’s even more remarkable is how the 49ers’ defense has recorded a second-half shutout in four consecutive games. Their opponents haven’t scored more than 16 points during that span either.

With impressive performances week after week, the 49ers have proven they have one of the best, if not the best, defenses in the league right now. They lead the NFL in a majority of defensive statistics, which is a big reason why they’re considered serious Super Bowl contenders this season.

The 49ers moved atop the NFC West by one game thanks to the victory and a Seahawks loss on Sunday. They’ll look to continue their defensive dominance into Week 13.

However, it’s a tough task ahead against a dangerous Miami Dolphins passing attack, especially after some crushing injuries to their secondary earlier this season. If Jimmy Garoppolo and the offense can step up, the 49ers will likely be in for a deep playoff run.