Deebo Samuel Sounds Off On Fans For Disrespecting Player Injuries 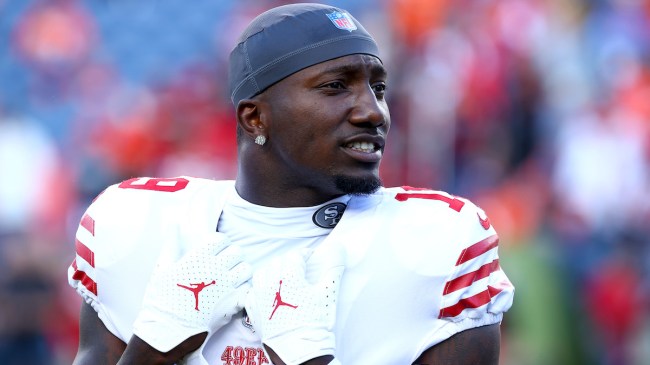 After injuries to Trey Lance, Elijah Mitchell, and George Kittle earlier this season, the San Francisco 49ers have started with an unimpressive 4-4 record. But the addition of Christian McCaffrey is promising and they were even projected as Super Bowl LVII favorites by NFL executives.

The 49ers seemed ready to live up to those expectations while coming off a bye in Week 9. Unfortunately, they were dealt yet another crushing blow. On Thursday, the team announced cornerback Jason Verrett had suffered an Achilles injury during practice.

It’s the latest setback in what has been an injury-filled career for Verrett. The Niners CB missed the entire 2021 season due to a torn ACL and only returned to practice in October. He previously tore his Achilles in 2018 and his ACL in 2016.

With another heartbreaking injury ending Verrett’s season, 49ers WR Deebo Samuel didn’t appreciate any disrespect being shown toward his teammate.

I swear some of y’all have 0 respect when people get hurt….. RIDICULOUS ‼️

The Niners star wideout isn’t alone in his frustrations. New Orleans Saints RB Alvin Kamara echoed the same sentiments last week in response to those critical of Michael Thomas’ injuries. You’d think fans would show more compassion, especially for those with an extensive injury history, but apparently not.

Despite only playing in 15 games since joining the 49ers in 2019, Verrett is one of the most well-respected players in the 49ers’ locker room. So the devastating injury news hit the team particularly hard and it’s likely why Deebo took to Twitter at all.

The 49ers’ defense ranks no. 1 overall in yards allowed per game after nine weeks. So they’ll look to continue that stellar form into Week 10 against the Los Angeles Chargers. A win on Sunday plus a Seahawks loss would put them half a game behind the NFC West lead.