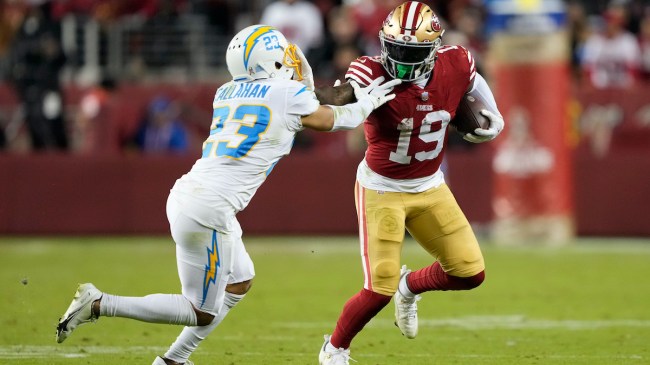 Deebo Samuel is a nightmare for NFL defenses to deal with thanks to his uncanny ability to turn short passes into big yardage gains. Whether he’s finding separation or simply plowing through defenders, the San Francisco 49ers star simply knows how to extend plays.

On Tuesday, the tables turned when the Samuel joined CBS Sports Radio’s Maggie and Perloff Show. Given his reputation for being “tough” to tackle, he was asked to rank the other “toughest” wideouts in the league besides himself.

“You can do a top five if you want, but you’re known for being tough. Who are the top three toughest wide receivers in the NFL, not including Deebo Samuel?” Maggie Gray asked.

While the answer is unexpected, it’s not all that surprising. Aiyuk has made it out of head coach Kyle Shanahan’s doghouse and become a key offensive threat for the 49ers offense. He has 80+ yards in the last four games and 4 touchdowns on the season.

Jennings is likely the most surprising name on the list, but clearly Samuel has major respect for his teammate. The former Tennessee Vol is the Niners’ WR3 and has stepped up with Samuel and George Kittle missing games earlier this season.

Samuel’s third and final pick is a solid choice to round out the list. The Tampa Bay Buccanners wideout is widely considered one of the best at his position. The fact Evans has 1000+ receiving yards in every season since 2014 also backs it up. There’s no question he has a reputation for toughness too, even earning a few ejections in his career.

It’s always fascinating to hear how top athletes rank others in their position. The 49ers will likely appreciate the support Samuel is showing for his teammates. They’ll certainly rely on that “toughness” from Samuel, Aiyuk, and Jennings as they make a playoff push.