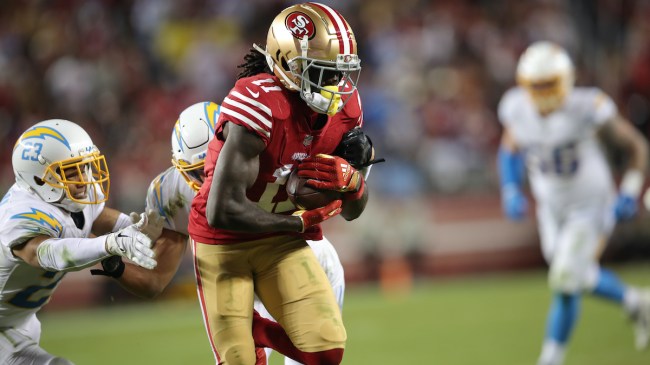 The San Francisco 49ers will travel to Mexico City for a Week 11 matchup against the Arizona Cardinals. But first, the team took a trip to Colorado Springs to prepare for the high elevation they’ll face on Monday night.

The 49ers-Cardinals divisional contest will take place at Estadio Azteca, which sits 7,200 feet above sea level. Santa Clara, which is home to Levi’s Stadium, has less than 100 feet of elevation in comparison. So to mimic the conditions in Mexico, the Niners have held practice this week at the United States Air Force Academy, which sits 6,788 feet above sea level.

Unfortunately, the NorCal-based football team was also subject to frigid weather conditions on top of the altitude. With light snow flurries and temperatures dropping below 20º, third-year wideout Brandon Aiyuk voiced his displeasure with the Colorado weather in a hilarious fashion.

#49ers Brandon Aiyuk didn’t get the memo on practicing in Colorado 😂 pic.twitter.com/lGjU77Dqun

Brandon Aiyuk Was Not Happy About The Cold Weather In Colorado

With the Week 11 matchup taking place in Mexico, Aiyuk was confused about why the team was in Colorado instead. While it might be good altitude training, the Niners wide receiver didn’t enjoy the freezing temperatures.

“I thought we was going to Mexico!!!” Aiyuk posted to his Instagram Story.

Aiyuk wasn’t the only 49er to dislike the cold either. Star ‘wide back’ Deebo Samuel didn’t even want to step outside for Thursday’s practice.

It seemed to be the general consensus for a team that’s used to the California sun. Most players wore long sleeves, face masks, and gloves to stay warm. Although, tight end Charlie Woerner was the one outlier who embraced the cold instead.

“Charlie is out of his mind.” #49ers HC Kyle Shanahan on TE Charlie Woerner on the practice field in shorts and a jersey while it was snowing. pic.twitter.com/uCDVNORFuZ

The 49ers will hope that this altitude training will prove useful during Monday Night Football. The Cardinals have opted to remain in Arizona while preparing, so the Niners very well could have an edge.

Luckily for Aiyuk and Samuel, Mexico City is expected to be much warmer with a high of 73º and a low of 51º on Monday. Given the recent snowstorm in Buffalo, the Niners receivers should just be thankful they don’t play for the Bills.