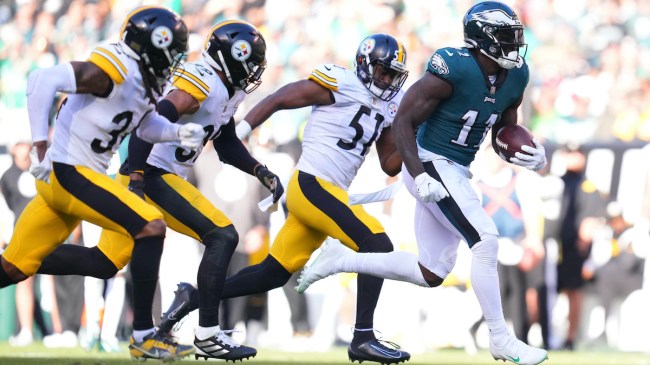 The Philadelphia Eagles cruised to 7-0 with a 35-13 victory over the Pittsburgh Steelers on Sunday and AJ Brown had himself a day. But it didn’t stop his teammates from roasting him for being chased down late in the game.

The Eagles acquired Brown in a trade from the Tennessee Titans during the 2022 NFL Draft and he’s quickly become a go-to target for quarterback Jalen Hurts. He made quite the debut in Week 1 by leading the team with 10 receptions for 155 yards.

Brown would eventually edge out that total by one yard on Sunday along with a season-high three touchdown catches. The Eagles’ WR nearly scored again in the fourth quarter on a 43-yard catch-and-run as well.

Unfortunately, Steelers safety Minkah Fitzpatrick caught him from behind with a diving tackle at the 11-yard line. Once back on the sideline, Brown’s teammates had some hilarious reactions to the clear lack of speed demonstrated.

"You officially faster than him."

A.J. Brown got roasted for getting caught from behind 😂 @1kalwaysopen_ pic.twitter.com/f5g7ExldO8

Brown couldn’t say much in defense though after what happened during the earlier play. And his teammates made sure to remind him of that.

Even Eagles linebacker Shaun Bradley later chimed in to say, “I thought you was faster than that.” Brown couldn’t believe the comment and was left considering the harsh reality that he simply might not be a speedster.

It was all in good fun considering Brown already had three touchdowns and 150+ yards at that point. It’s definitely great to see that he’s getting along well with his new teammates.

Brown has clearly established a superb connection with his quarterback too. Through seven games, he leads the team in receiving yards (654), targets (63), overall receptions (39), and touchdown receptions (5).

Whether he’s the fastest receiver or not, fans can expect Brown to continue playing a large role in the team’s success.

The Eagles will look to keep their undefeated streak alive into Week 9 against the Houston Texans for Thursday Night Football.