NFL Fans Have Wild Theories For Why Odell Beckham Jr. Is Suing Nike For $20+ Million 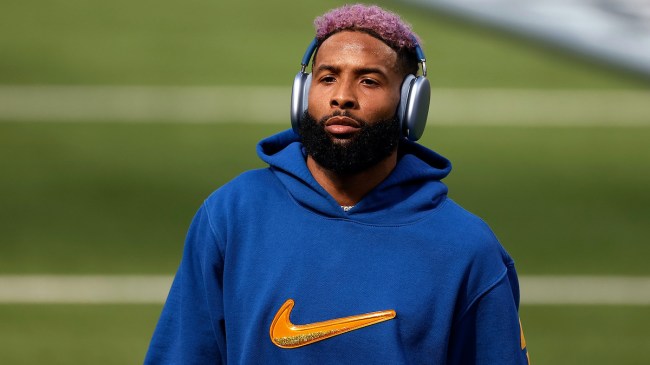 Odell Beckham Jr. is suing Nike for more than $20 million, claiming the company “did not honor its commitments” in their latest partnership.

The free-agent wide receiver is expected to sign a new contract in the NFL soon, but he’s also filing a lawsuit against Nike following a dispute over his endorsement contract. Beckham Jr. re-signed with the apparel giant in 2017 after they matched a competing offer from Adidas, but the relationship has clearly gone downhill since.

According to TMZ Sports, Beckham Jr. believes the way his Nike deal was structured made it “nearly impossible” to hit bonuses and incentives. Then Nike allegedly withheld more than $2 million in March 2022 for glove and footwear violations.

On Monday, Beckham Jr. released a statement about the ongoing legal battle. Despite first calling the opportunity to be a Nike Athlete a “dream”, he’s now hoping to hold the company accountable.

The star wideout also makes it clear that it’s not just a move for himself. He’s aiming to “set a precedent for all athletes” when it comes to protecting their rights.

“I look forward to resolving this issue and hope we can start a real conversation about protecting athletes and their rights. This happens too often in the sports industry and it’s time for change.”

It’s a respectable decision from Beckham Jr. If big companies aren’t honoring his or any other athletes’ contracts, then a stand must be made. However, it hasn’t stopped fans from cracking jokes with their own theories for the lawsuit.

After the major downturn in the cryptocurrency market over the last year, Beckham Jr.’s decision to receive his entire salary in bitcoin from the Rams in 2021 made for an easy target.

Dude is broke from the salary to Bitcoin 😂

Other fans kept their own teams in mind given Beckham Jr. is looking to join a team before the end of the season.

One fan felt he should opt for a different lawsuit after Justin Jefferson’s incredible one-handed catch on Sunday.

Should sue Justin Jefferson for copyright violation with his catch yesterday.

Others are simply tired of waiting for him to return.

Beckham Jr. is making quite a few headlines for someone who hasn’t stepped onto the field so far in 2022. Despite all the jokes, he’s clearly doing it for the right reasons.

Fans can likely expect more headlines in the coming weeks as teams pick up their pursuit of the talented free-agent wide receiver.