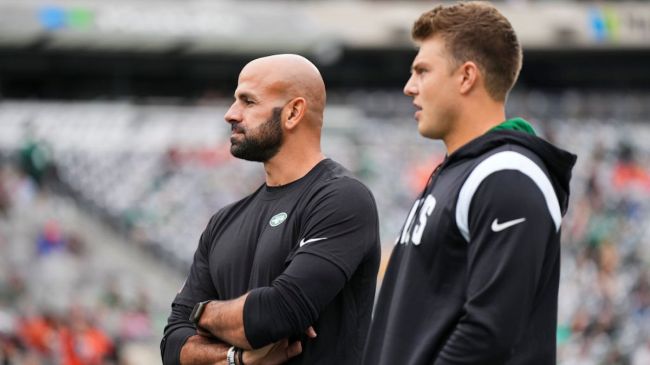 The New York Jets are making a change at quarterback after the debacle surrounding Sunday’s loss to the New England Patriots.

Despite an outstanding performance from the Jets’ defense, the Patriots pulled out a stunning 10-3 victory by way of a game-winning punt return touchdown in the final seconds. Zach Wilson completed 9-of-22 passes for only 77 yards and the offense’s disappointing second-half efforts proved costly.

To make matters worse, Wilson reportedly ruffled feathers in the locker room by refusing to take accountability during a post-game interview. Then HC Robert Saleh wouldn’t commit to the second-year QB earlier this week.

On Wednesday, Saleh announced that Mike White will start in Week 12 against the Chicago Bears in place of a benched Wilson. Joe Flacco will also serve as the backup with Wilson listed as a healthy inactive.

The Jets are still in the playoff hunt at 6-4, but Wilson has struggled much of the season with more interceptions than touchdowns so far. It seems the combination of his poor performance and post-game comments were the last straw though.

While Saleh believes this change is necessary at the moment, he makes an extra effort to emphasize how Wilson’s career in New York is far from over.

Coach Saleh says the intent is for QB Zach Wilson to get back on the field at some point this year. pic.twitter.com/R8Cg22B2Wu

Saleh doesn’t offer an exact timeline, but he claims the plan is for Wilson to return before the season ends. However, it’s ultimately up to Wilson to show that he deserves the starting job back.

“The intent, the full intent, is to make sure Zach gets back onto the football field at some point this year. When that is, I’ll make that decision, I’m going to take it day to day. The biggest thing with Zach, it’s the same things we’ve talked about, is the young man needs a reset,” Saleh said.

The Jets will move forward with White starting on Sunday as they push for the playoffs. Whether Wilson will rejoin the team for any of the six regular season games after remains to be seen. At least he appears to have the full support of his head coach through it all.