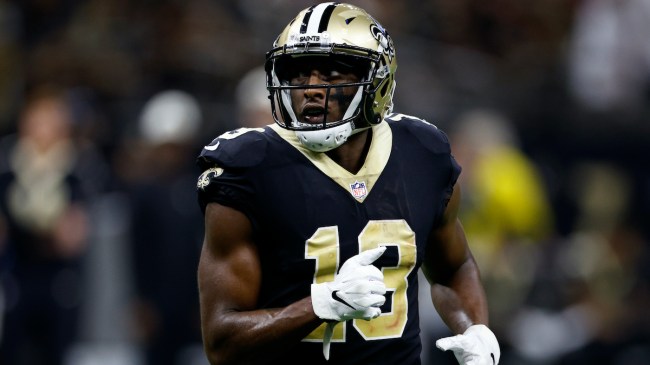 After just three games played in the 2022 NFL season, New Orleans Saints WR Michael Thomas is back on IR and expected to miss the remainder of yet another season.

The former Ohio State Buckeye has become one of the most dominant offensive threats in the league and set an NFL record with 149 receptions in 2019. Unfortunately, Thomas has struggled to remain healthy in the years since. He suffered a season-ending ankle injury in 2020 and remained sidelined for 2021 as well.

The Saints’ star wide receiver would eventually return in Week 1 of 2022 with two touchdown catches in an impressive showing. But once again, his season has seemingly come to an abrupt end due to injury.

On Thursday, Saints head coach Dennis Allen announced that Thomas had been placed on injured reserve and was set to undergo surgery on a dislocated toe.

Thomas suffered the injury in Week 3 against the Carolina Panthers and had not returned to the field since. Allen told reporters that recovery hadn’t gone as hoped and Thomas was likely to miss the rest of the season.

Saints’ HC Dennis Allen told reporters today that he does not expect WR Michael Thomas to play again this season.

It’s a brutal loss for the Saints offense, but it’s the common trend in recent years. After his standout performance in 2019, Thomas has not made it through an entire season without injury.

In the last 50 regular season games for the Saints, he’s only managed to play in 10 total. It’s not what the Saints were hoping for when they signed him to a massive 5-year, $96.25 million contract extension.

Despite their inconsistencies this season, the Saints are 3-5 and still in the fight for the NFC South. They share the same record as the Tampa Bay Buccaneers and only trail the Atlanta Falcons by one game.

It won’t be any easier with Thomas not expected to return this season. He still leads the team in touchdown receptions even after his injury.

Rookie Chris Olave has emerged as an outstanding replacement WR1. But if the Saints want to make a serious playoff push this season, they’ll need him and others to step up in the red zone.

Thomas will likely look ahead to 2023 as he recovers from toe surgery. The Saints will hope he can return to that 2019 form for the final year of his contract, but the past three years are not a good sign.