Jameis Winston Speaks Out About Losing Starting Job To Injury, Says ‘It Hurt My Soul’ 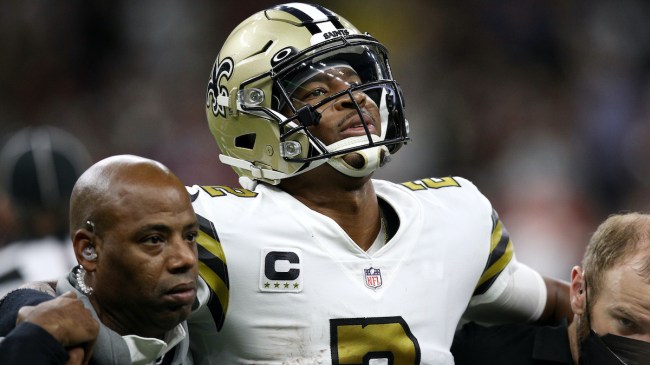 New Orleans Saints quarterback Jameis Winston is set to miss another week after the team named Andy Dalton as the starter for Sunday’s game against the Los Angeles Rams.

The former Buccaneers QB has not played since Week 3 against the Carolina Panthers due to back and ankle injuries. Dalton replaced him in the meantime, but Winston expected to get the job back upon recovery. It hasn’t happened though.

Despite returning to practice in Week 6, Winston has yet to reclaim the starting position. On Friday, he spoke to the media and shared his frustrations about being benched due to injury. It’s clear that he doesn’t agree with the decision.

"It hurts my soul…I lost my job due to injury, and the policy has always been you don't lose your job because of injury…" – #Saints QB Jameis Winston

“It hurts my soul and that’s all I can say,” Winston told reporters. “I lost my job due to injury and the policy has always been you don’t lose your job because of an injury. And that’s what happened.”

The Saints QB believes he is healthy enough to play again, but HC Dennis Allen seems to think otherwise. He told reporters earlier this week that he didn’t think Winston would be 100% again this season.

Winston played in Week 2 against the Tampa Bay Buccaneers despite having four fractures in his back. Then he was benched after Week 3 so he could fully recover from the injuries.

While Winston may not agree with the decision, he’s being a team player about it. If Allen does have a change of heart, the Saints’ Week 1 starter claims he’ll be ready to step up.

“When my number is called I’ll be ready” – Jameis Winston pic.twitter.com/8ZoK5cDcJe

The Saints are 1-2 under Winston and 2-5 under Dalton, so it’s not like either one is an obvious choice. But after back-to-back losses with uninspiring performances from Dalton, fans are calling for Winston to get another chance.

With the Saints QB expressing his own frustrations about remaining on the bench, the pressure is mounting on the current starter. If Dalton can’t deliver a solid performance against a struggling Rams team, who are without Cooper Kupp, the calls for Winston to start will only get louder.