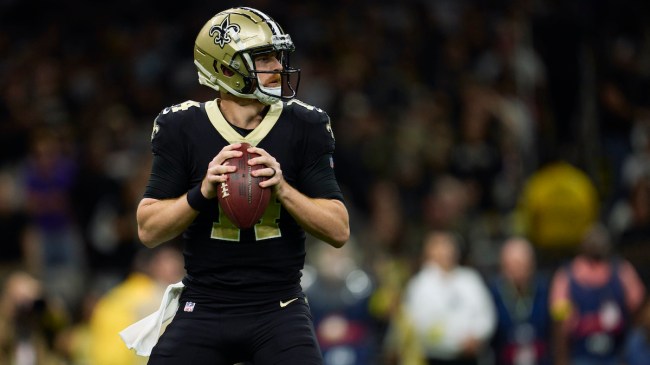 Primetime football has not treated veteran quarterback Andy Dalton kindly and his struggles continued into Monday Night Football’s matchup against the Baltimore Ravens.

It was an impressive showing from the Ravens’ defense with newly acquired linebacker Roquan Smith. They limited Alvin Kamara to 62 total yards and sacked Dalton four times along with an interception. Michael Thomas was sorely missed by the Saints’ offense and their only touchdown came on a Juwan Johnson reception in garbage time.

The Saints fumbled the opportunity to join the Buccaneers and Falcons in a three-way tie atop the NFC South and fell to 3-6 with the loss. Unfortunately for Dalton, it also meant he now has the worst primetime record since the NFL merger in 1966.

Andy Dalton's 6-20 record in primetime is the worst since the merger (min. 25 starts) 😮 pic.twitter.com/wMdNtd0530

Andy Dalton Has The Worst Primetime Record Since NFL Merger

Dalton has started a total of 26 games under the lights through his 12 seasons in the NFL. He’s lost 20 of them now following Monday’s loss to the Ravens. The previous one came in Week 8 against the Arizona Cardinals when he threw 4 touchdowns and 3 interceptions.

The Saints quarterback hasn’t won on Monday night in almost 8 years either. It’s definitely got some fans wondering if he is truly a better option than a healthy Jameis Winston.

Andy Dalton has not won on a Monday since December of 2014😬 pic.twitter.com/qK8SRL65a7

Winston, who started in the first three weeks, returned from injury ahead of the Saints’ Week 8 matchup against the Las Vegas Raiders. However, head coach Dennis Allen opted to keep Dalton as the starter moving forward.

Some fans are questioning the decision after the three-time Pro Bowl QB has gone 2-4 in starts this season. Of course, do-it-all utility man Taysom Hill is also an option for the Saints.

How do you watch Andy Dalton, Jameis Winston and Taysom Hill play football and think Andy Dalton gives you the best chance to win????

After Fields’ incredible performance against the Miami Dolphins on Sunday, the difference in production between the two quarterbacks is particularly noticeable.

Dalton will have an opportunity for redemption in primetime and on Monday with a Week 13 matchup against the Tampa Bay Buccaneers. However, he may not even be the Saints’ starter at that point if the offensive struggles continue.