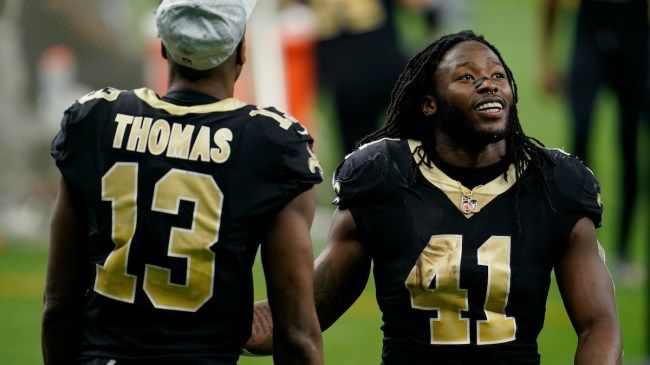 The New Orleans Saints got some rough injury news on Thursday with star wide receiver Michael Thomas expected to miss the rest of the season to injury.

It’s become a familiar scene for the 2019 AP Offensive Player of the Year. Thomas has suffered a brutal string of injuries following his record-breaking season. On Thursday, the Saints announced yet another setback by placing Thomas on injured reserve for season-ending toe surgery.

With some criticizing Thomas for having a third consecutive season cut short, Saints RB Alvin Kamara has come to his teammate’s defense. During a press conference on Friday, he shared an inside perspective on the star wideout’s recent injury struggles.

Alvin Kamara gives a long response on the Saints without Michael Thomas and the criticism he’s getting pic.twitter.com/ei0qFzTxeJ

It appears Kamara is most bothered by the comments questioning his teammate’s character.

“I just saw a couple of comments within the media about him, basically like, ‘You can’t trust him’ or ‘He is not being honest about his injury, like why is he waiting until now to be ruled out.’ Nobody knows what we go through in here. The masses just see Sunday.”

Much of the criticism stems from Thomas’ recent injury history. He missed nine games in 2020 and the entire 2021 season due to an ankle injury.

With another injury causing him to miss more games, some have implied Thomas is collecting a paycheck with no real desire to play football. Kamara clearly feels that couldn’t be further from the truth.

“A player like that fighting to get back not only for his team but for the fans and this city, and for people to be talking s**t, it just irks my soul to see that. We get paid to play obviously and we want to be available. But when you can’t do it, it’s certain things you gotta be smart about. So he’s not going to ruin the rest of his career for right now.”

Michael Thomas Wanted To Play In Week 8 Despite His Injury

Kamara went on to reveal how the Saints wide receiver desperately wanted to suit up in Week 8 before the team placed him on IR. Clearly, Thomas wants to be back on the field just as much as fans do.

“Out of anybody in this locker room, [Thomas] is one of them dudes who is fighting to be on the field. He even wanted to play still knowing he had to do that and fix his foot and be out for the rest of the season. With it being that severe, he was still trying to play last week.”

The Saints managed without Thomas in Week 8 and dominated the Raiders in a 24-0 victory. The star wideout hasn’t seen the field since Week 3 and likely won’t for the remainder of the season.

The hope is he can return fully healthy for Week 1 in 2023. In the meantime, the Saints will continue to rely heavily on Kamara in a tight race for the NFC South.