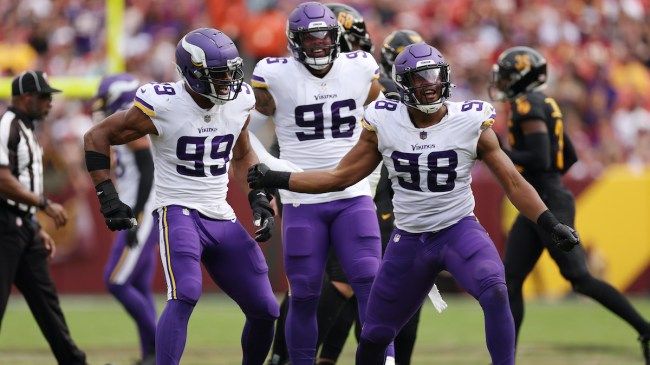 NFL defenses have provided fans with some memorable celebrations so far this season, but the Minnesota Vikings and safety Harrison Smith might’ve outdone everyone on Sunday.

The Vikings entered the fourth quarter down 10-points to the Washington Commanders before making it a one-possession game with a field goal. Then Smith came up clutch by intercepting Commanders QB Taylor Heinicke to set up the game-tying touchdown.

The game-changing turnover was made even better by a potential ‘celebration of the year’ from the entire Vikings defense. It was creativity and coordination at its finest with Smith bowling the football for a strike while knocking over his teammates who acted as pins.

The Vikings must’ve been practicing celebrations during their bye in Week 7. So the interception was the perfect opportunity to show it off. Even linebacker Jordan Hicks makes the most of his performance as the last pin to wobble before falling.

With Smith returning the ball to the Washington 12-yard line and setting up the Vikings for an easy score, it’s a well-deserved celebration. Dalvin Cook would find the endzone on a Kirk Cousins pass two plays later to tie the game at 17-17.

It’s not the first time the Vikings’ defense has made headlines with their celebration. Just a week earlier, cornerback Patrick Peterson trolled his former teammate Kyler Murray with Call of Duty-inspired celebrations. According to safety Josh Metellus, this week’s celebration won’t be the last either.

The Vikings would score a game-winning field goal to move to 7-1 on the season. They’ll look to continue their impressive run with a tough matchup against the Buffalo Bills in Week 10.

With a firm hold on the NFC North and more incredible celebrations in store, football fans should definitely keep their eyes on the Vikings moving forward.