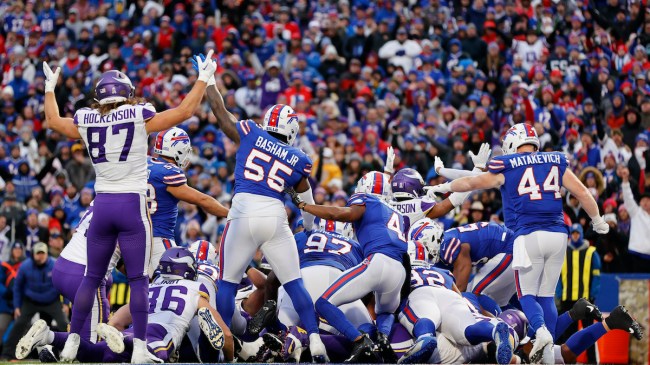 The Minnesota Vikings and Buffalo Bills delivered a regular season thriller on Sunday, which finished with easily the craziest fourth quarter of the season… and maybe even ever.

It was a dominant first half from the Bills and they got out to a 17-point lead early in the third quarter. But the Vikings rallied back with an 81-yard rushing touchdown from Dalvin Cook. Then an uncharacteristic red zone interception from Josh Allen allowed the Vikings to cut the deficit to 4-points.

The Bills’ offensive struggles continued as they failed to score a second-half touchdown in back-to-back weeks. Kirk Cousins got the ball back with 3.5 minutes remaining, but chances of completing the comeback looked slim as he was sacked twice.

However, star WR Justin Jefferson came up clutch on 4th & 18 with one of the greatest catches of all time. He made a miraculous one-handed snag despite Bills CB Cam Lewis seemingly getting two hands on the ball.

Unfortunately, the Vikings were then stuffed at the 1-yard line on 4th & goal. Most expected that to be the end of it with the ball back in Buffalo’s possession and less than a minute to go.

Allen attempted a QB sneak to put an end to the game and disaster struck. He fumbled on the snap and the Vikings recovered for a touchdown to take the lead 30-27.

Before football fans could even comprehend the madness that had just unfolded, the Bills tied the score at 30-30 to push it to overtime.

The Vikings would settle for a field goal to open the scoring, leaving the door open for a game-winning drive from Allen. The Bills quarterback drove 72 yards downfield, but it all came to an end with his second red zone interception of the day.

From Jefferson’s unbelievable catch to the Vikings’ crucial defensive touchdown to Allen’s uncharacteristic turnovers, football fans went through a roller coaster of emotions.

The spectacular back-and-forth in the final minutes of the games was enough to make it a candidate for game of the year, but the OT finish was especially fitting. Some are even calling it one of the greatest regular season games ever.

This Vikings/Bills game deserves a statue in Canton

To Overtime WE GO

Vikings-Bills = best regular season game of the year. Maybe the decade. Maybe ever.

The Vikings’ victory put an ever larger spotlight on Jefferson’s fourth-quarter heroics. The third-year wideout finished the game with 10 receptions for 193 yards and 1 touchdown. He’s definitely making a convincing argument for the best wide receiver in the league right now.

Justin Jefferson probably became the best WR in the NFL today if you didn't believe it already.

The entire Vikings team is finally getting the respect it deserves too. They move to 8-1 on the season with a statement win over the Super Bowl favorites.

The game might’ve even been a preview of Super Bowl LVII if the Vikings can continue their impressive run. But the Bills will need to bounce back after suffering a heartbreaking loss for the second week in a row.