WATCH: Marshawn Lynch Visited A Farm And Was Deathly Scared Of Pigs 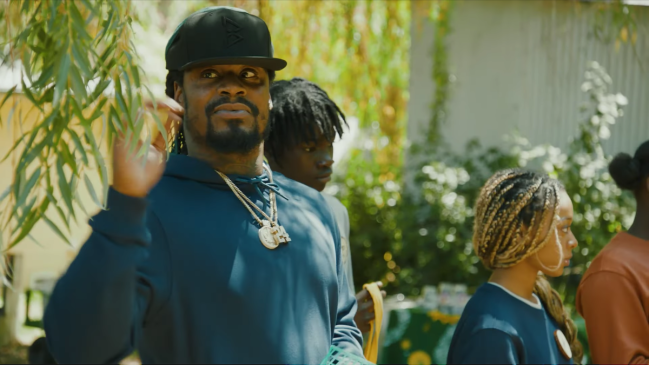 Seattle Seahawks legend Marshawn Lynch has branched out with several community initiatives since stepping away from football. However, he was definitely out of his element on a recent excursion into Mother Nature.

After retiring from the NFL in 2019, the five-time Pro Bowler teamed up with New Zealand-American footwear and apparel company Allbirds and EARTHseed Farm, a 14-acre organic orchard, for an amazing YouTube series to promote sustainability and combat climate change.

On the latest episode, Lynch and his classmate joined the farm’s founder Pandora Thomas for a hands-on field trip to Sonoma, California. They got to pick fruit, dye shoes, and even feed some pigs, which Beast Mode hilariously refused to take part in.

Marshawn Lynch Gets Scared By Pigs On Visit To EARTHseed Farm

Lynch might be known for running through entire NFL defenses on his way to scoring a touchdown, but he wouldn’t even consider stepping into the pig pen.

He still couldn’t be convinced even when one brave student offered to accompany him into the pen.

“What did I tell ya’ll last time? Seems like ya’ll don’t remember. I’m a grown a** man. Peer pressure don’t work on me,” Lynch said with a laugh. “I got on sandals. Why would I go into the pig pen with sandals on? Even though I’m in the lemon pepper steppers, I don’t think it’s going to work.”

His fellow classmates, like myself, were dumbfounded by his unexpected fear.

“Marshawn, he has tattoos. He does so much other stuff, but then he won’t go by a pig,” one said.

“They was cool pigs. I don’t what he was scared of,” another added.

“You know these kids nowadays,” Lynch responded. “They just throw you under the bus while looking right in your face.”

Despite the light-hearted teasing, Lynch still gave himself an A+ for the day.

All in all, it’s great to see the former NFL star making efforts to support his community and having fun while doing it, aside from the pigs.