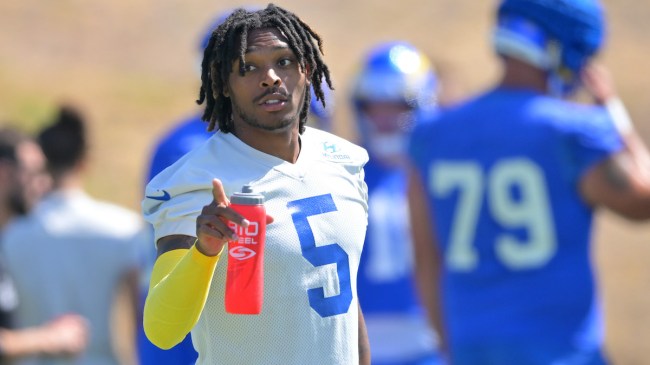 On Thursday, Amazon Prime Video debuted “TNF in The Shop” for the Packers-Titans game. The alternative broadcast, similar to ESPN’s Manningcast, was hosted by James and featured Ramsey along with several other celebrity guests.

During the episode, the 4-time NBA MVP makes a bold claim that his Madden playbook was stolen and implemented on-field by Rams HC Sean McVay. James was in for a brutal reality check though since Ramsey was in attendance.

The Rams’ defensive star didn’t let the comments about his head coach slide and clapped back with a hilarious reference to James’ history of lies.

"You know what they saying on Twitter right now!"@jalenramsey is making sure that @KingJames has seen the memes 😂

James had jokingly accused McVay of stealing the idea to use Ramsey as a QB spy, which the Lakers star apparently does when playing Madden. The Rams cornerback wasn’t so sure about that.

“Bron, you know what they saying on Twitter right now? They say you be cappin’,” Ramsey said.

Not so surprisingly, it’s another lie from the Lakers star. Despite his claims, James hasn’t always been honest. Just earlier this month, he became the subject of internet memes after being caught lying about when he discovered the Migos.

With someone finally providing some pushback to James’ lies, fans were absolutely loving it.

Even Jalen Ramsey was like “alright bro just relax” 💀💀 https://t.co/I9VRU7zh4i

Ramsey is simply keeping it real and we could all use a bit more of that.

A lot of y’all need more friends like @jalenramsey 😂😂😂 https://t.co/u3covaHl3P

While everyone at home was laughing, James likely didn’t appreciate it as much. However, he seemed to handle it well enough.

Best of all, fans quickly noted how James had seemingly lied a few more times during the interaction.

“That’s so funny, we actually talked about this the other day” that’s a lie too 😭😭😭

Ramsey and the Rams are dead last in the NFC West at 3-6 through ten weeks. So perhaps James is telling the truth and the team is using his playbook after all. It would definitely help explain their recent struggles.