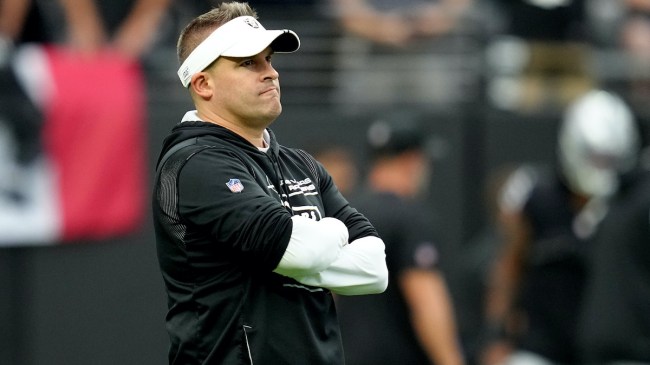 The Las Vegas Raiders are a disaster under Josh McDaniels. Through ten weeks, they have the second-worst record (2-7) in the NFL. It’s far from expected considering they finished 10-7 last season and made it to the AFC wild-card game all before signing Davante Adams.

Despite calls for a coaching change after Sunday’s loss to the Indianapolis Colts, Raiders owner Mark Davis remains committed to the former Patriots’ offensive coordinator. While it appears the team believes McDaniels can be the long-term solution, they may have no other choice financially.

On Tuesday, Bill Plaschke of the Los Angeles Times reported that McDaniels would remain the head coach through at least 2023. However, his reasons are fairly concerning for the Raiders.

Report: The reason the #Raiders won't fire Josh McDaniels is financial – "They don't have the money to fire him."

The team is "cash poor" and can't afford to fire McDaniels and then pay another coach, according to @BillPlaschke

"He'll be the coach this year and next year." pic.twitter.com/bQ4VBSQSme

Raiders Are Reportedly Too ‘Cash Poor’ To Fire Josh McDaniels

“I’m saying right now: Josh McDaniels will be the coach this year and next year. Raiders don’t have the money to fire him, to pay him off. They’re cash poor,” Plaschke said during ESPN’s Around The Horn.

It’s not too surprising that the Raiders could be facing some financial woes currently. They just built a new $1.9 billion stadium in 2020. Then they agreed to an undisclosed settlement with Jon Gruden in 2021. The former head coach was still owed $40 million in guaranteed money from his 10-year, $100 million deal before resigning.

With McDaniels only in the first year of his four-year deal, it makes sense why the Raiders would be hesitant to pull the plug so quickly. However, money problems aren’t ideal for a team that needs to rebound in 2023.

The 2022 season has been a major disappointment for the Raiders, but it’s not over yet. McDaniels will hope to salvage what’s left and finish his first year on a high note, starting in Week 11 against the Denver Broncos.