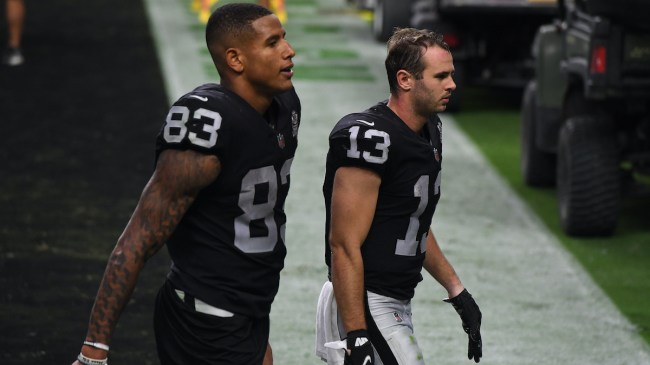 The Las Vegas Raiders just can’t catch a break in 2022. Despite the addition of star WR Davante Adams in the off-season, the team sits last in the AFC West with a disappointing 2-6 record.

After being shut out in Week 8 by the New Orleans Saints, the Raiders blew a 17-0 lead to the Jacksonville Jaguars in Week 9. To make matters worse, they received brutal injury updates to two key offensive players ahead of their Week 10 matchup against the Indianapolis Colts.

On Thursday, the Raiders announced they were placing Darren Waller on injured reserve. The star tight end exited the game early in Week 5 due to a hamstring injury and hasn’t since up since.

Raiders are placing TE Darren Waller on injured reserve, per source. Waller aggravated his hamstring injury and the team believes this will give him four weeks to get it healthy and come back to finish the season.

It’s a tough loss for the Raiders as Waller has proven to be one of the best tight ends in the league when healthy. He recorded 1,100+ yards in 2019 and 2020 but injuries have been an issue as of late.

Waller missed 5 games in 2021 due to a knee injury, back injury, and stint on the COVID-19 list. He’ll now miss at least seven games in 2022. But the Raiders are optimistic that he can return fully healthy to finish the season after a four-week stint on IR.

If that wasn’t enough bad news, the Raiders followed it up by placing wide receiver Hunter Renfrow on injured reserve due to his oblique injury. The Raiders’ no. 2 receiving option behind Adams also missed two games earlier in the season due to a concussion.

And one more: Raiders also are placing WR Hunter Renfrow on injured reserve due to his oblique injury, per source. So on the same day, both Renfrow and Darren Waller both are being placed on IR, meaning they’re out at least four games each.

The Raiders’ offense will rely heavily on Davante Adams and Josh Jacobs with both Waller and Renfrow ruled out for the next month, but it’s nothing new. According to ESPN’s Adam Schefter, their Big Four has only played together on 43 plays this season.

They’ll have an opportunity to bounce back on Sunday against a Colts team that just named a new, inexperienced interim head coach. Jeff Saturday’s previous comments should serve as extra bulletin board material too. So if the offensive struggles continue, Raider Nation could be in for a long month.