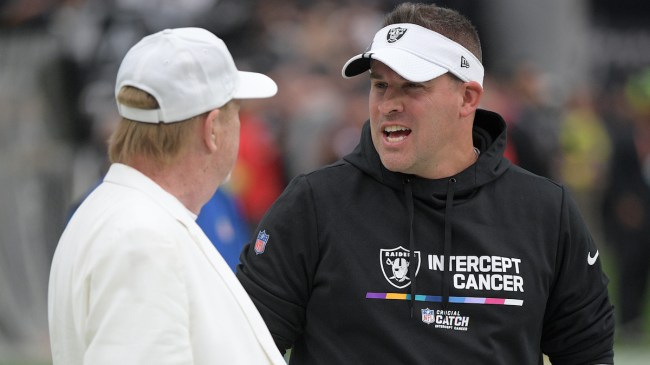 Josh McDaniels is off to a disappointing 2-7 start as head coach for the Las Vegas Raiders. Even still, it appears team owner Mark Davis isn’t planning on parting ways with the former New England Patriots offensive coordinator anytime soon.

The Raiders’ horrendous 2022 season hit a new low on Sunday as they lost to the Indianapolis Colts. Despite just naming Jeff Saturday as interim head coach and switching starting quarterbacks at the last minute, the Colts came out and stunned the Raiders 25-20.

With increased scrutiny on McDaniels following his third consecutive loss to teams with losing records, Davis shared some reassuring words for his head coach. While most would describe the Raiders’ season so far as frustrating, unexpected, or even awful, he went with “fantastic” instead.

“I like Josh. I think he’s doing a fantastic job. That’s why I hired him,” Mark Davis said. “We did an exhaustive search and found the person we believe is going to bring the Raiders to greatness.” #RaiderNation https://t.co/VQlsRv1wZr

“I like Josh. I think he’s doing a fantastic job. That’s why I hired him. We did an exhaustive search and found the person we believe is going to bring the Raiders to greatness.”

McDaniels previously spent 10 years with the Patriots as their offensive coordinator and quarterbacks coach. They had winning records in nine of those seasons along with three Super Bowl victories.

Then the Raiders signed him to a 4-year contract ahead of the 2022 season. It seems Davis intends to see it through to the end in spite of the poor 2-7 start.

“As far as Josh goes, I have no issues. I’m getting to know him a lot better. When you sign some to a contract, don’t you expect them to fulfill the contract?”

Hopes were high for the Raiders going into the season, especially after trading for Davante Adams. The star wide receiver has certainly proven his worth with 784 yards and 8 touchdowns on the season. But even 100+ receiving yards in the last two games hasn’t been enough.

Running back Josh Jacob has also slowed down from his sensational start and injuries to Darren Waller and Hunter Renfrow haven’t helped either. With playoffs seemingly out of the question, Davis understands Raider Nation’s frustrations.

Although he appears fairly content with focusing ahead on 2023 despite the expectations for 2022.

“Life isn’t static. It’s fluid. You want to win at the end of the year and be the one holding the trophy. Obviously, we’re not there yet. I know it’s frustrating for the fan base. I feel for them. I’m a fan as well.”

Most Raiders fans probably won’t agree with Davis’ assessment. But they’ll hope McDaniels can learn from this rough first season as they’re stuck with him for the foreseeable future.