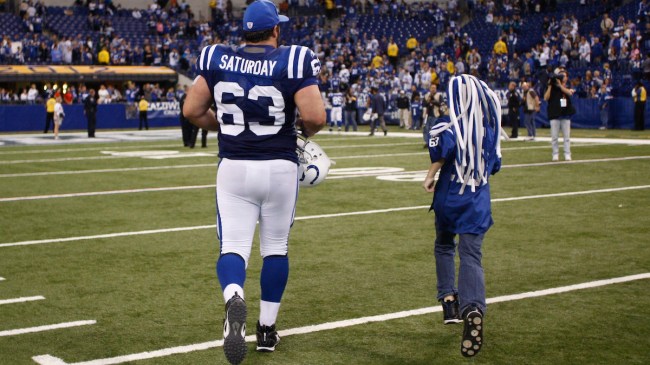 The Indianapolis Colts (3-5-1) lost their third straight game on Sunday to the New England Patriots and it signaled the end of Frank Reich’s time as head coach. On Monday, the team fired Reich and announced former center Jeff Saturday as the interim head coach.

Despite benching Matt Ryan for Sam Ehlinger in Week 8, the Colts were still in desperate need of a change. However, it’s an unexpected move given Saturday has no prior coaching experience in the NFL or college. The six-time Pro Bowler played 13 seasons in Indianapolis before joining ESPN as an analyst in 2013.

It appears Saturday wasn’t even aware that he’d be named the Colts’ head coach until recently. Otherwise, he likely wouldn’t have been so critical of the Las Vegas Raiders in Week 8.

Like many others, Saturday was stunned by the Raiders’ ugly performance in the 24-0 loss to the New Orleans Saints. He was still an analyst for ESPN at the time and didn’t sugarcoat his reaction. With the Colts facing the Raiders in Week 10 for Saturday’s first game, the tweets could come back to haunt him.

Don’t think Jeff Saturday knew he’d be coaching against the #Raiders when he sent this tweet last week… https://t.co/ubTnXMW6dD

Saturday even took a shot at star wide receiver Davante Adams after he went the first half without a reception. Despite five targets, Adams finished the night with a single reception for three yards.

The Colts will hope to contain him to a similar performance in Week 10, but it won’t be easy. Adams bounced back in Week 9 with 10 receptions for 146 yards and 2 touchdowns.

Something wrong with my fantasy stats. Says Devante Adams has 0…0 for the first half🤦‍♂️🤦‍♂️

The last time the two teams faced off was in Week 17 of the 2021 season. The Raiders pulled off a narrow 23-20 victory thanks to a field goal as time expired. They’ll now have extra motivation leading up to their matchup in 2022 thanks to Saturday’s tweets.

Neither team is having the season they would’ve hoped for and a win in Week 10 could be the jump start needed to turn their season around.