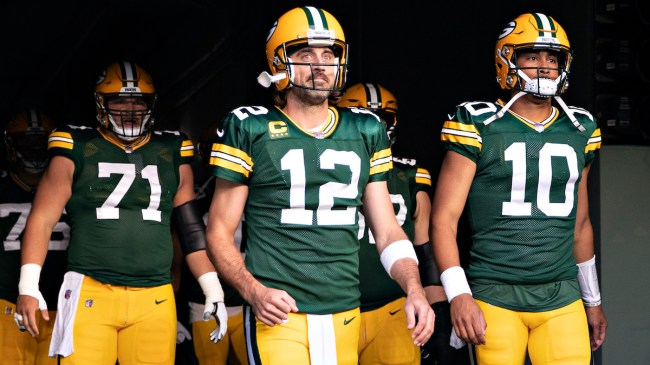 The Green Bay Packers are going through a rough one this season. They’ve lost 5 straight games and are 3-6 following Sunday’s loss to the Detroit Lions. Perhaps what’s most alarming is their offensive struggles with quarterback Aaron Rodgers.

After back-to-back MVP seasons, Rodgers isn’t finding the same success in 2022. He’s already thrown more picks than he did in the entire 2021 regular season and the Packers’ offense ranks 27th in points per game through nine weeks.

Rodgers seemingly blamed his teammates for their offensive troubles after losing to the Washington Commanders in Week 7. However, his abysmal performance in Week 9 has some fans wondering whether it’s time for Jordan Love to step in.

Aaron Rodgers said about a week ago: "Guys who are making too many mistakes shouldn't be playing, you know. Gotta start cutting some reps, and maybe guys who aren't playing, give them a chance,"

So… is it Jordan Love time? pic.twitter.com/hXtdtLFMrs

The Packers traded away star WR Davante Adams during the off-season and Rodgers has not been on the same page as his receivers ever since. He didn’t hide his frustrations during an appearance on the Pat McAfee Show earlier this season and shared some harsh words for his teammates.

“Guys who are making too many mistakes shouldn’t be playing, you know. Gotta start cutting some reps, maybe guys who aren’t playing, give them a chance.”

However, it was Rodgers who made the mistakes on Sunday. He started the game by throwing two interceptions in the red zone before another pick early in the third quarter.

The @Lions get another goal line stop! @aidanhutch97

The Lions entered the game with the worst record in the NFL and only had 2 interceptions all year, so Rodgers wasn’t exactly facing an elite defense. He later chalked the loss up to mistakes rather than being outplayed, which makes his Week 7 comments all the more ironic.

Rodgers finished the game with 1 touchdown and 3 interceptions and his previous comments were quickly turned against him. Even his teammates are reportedly upset about being scapegoated for the team’s problems.

The schedule doesn’t get any easier for the Packers as they take on the Cowboys in Week 10. Rodgers will hope for any improvement at all from last week’s performance. But it may only be a matter of time until Love starts getting some reps if the mistakes continue. It’s what Rodgers wants, right?