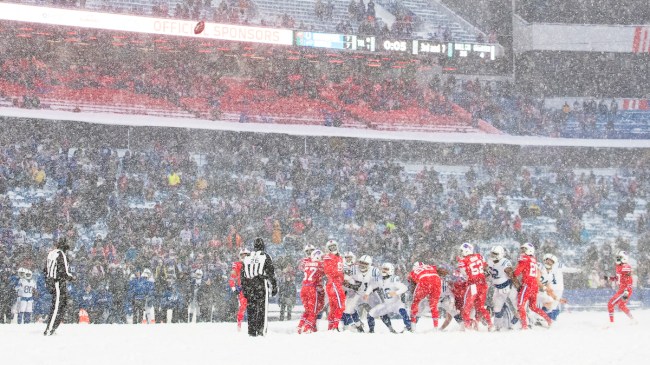 The Buffalo Bills host the Cleveland Browns on Sunday, except the game won’t be held in New York.

With forecasts of a massive snowstorm hitting Buffalo in the coming days, football fans were hoping for a repeat of the iconic Snow Bowl from 2017. Unfortunately, the Bills’ Week 11 home game won’t actually take place at Highmark Stadium due to public safety concerns.

On Thursday, the NFL announced the Bills-Browns game will be moved to Detroit’s Ford Field “in light of the ongoing weather emergency in western New York”.

Due to public safety concerns and out of an abundance of caution in light of the ongoing weather emergency in western New York, Sunday's game against the Browns will be moved to Ford Field in Detroit.

With forecasts projecting three to six feet of snow by Sunday, the conditions are simply too hazardous to keep the game in Buffalo. The potential for “thundersnow” also gives reason for extra concern. So the decision makes sense for the safety of fans in the area and the teams involved.

It’s not the first Bills’ game to change locations due to blizzard-like conditions either. Most recently, the NFL moved the Bills-Jets game to Detroit in 2014.

Forecasts calling for snow totals of 3-to-6 feet by Sunday in Buffalo, including possible “thundersnow.” Last time snow forced NFL to move a game out of Buffalo was 2014, when Jets and Bills played that Monday night in Detroit. NFL monitoring storm, talking to Bills and Browns.

Whether it’s snow angel celebrations, snowman fans in the stands, or the all-around chaos resulting from the weather, there’s simply an added excitement to “snow games”. So the change of location has caused a stir among fans.

While the move will likely allow both teams to perform better—sorry to those who already bet the over—fans still felt robbed by the No Fun League.

The phrase even started trending after the news broke.

The No Fun League is at it again https://t.co/1KXpZLosX3

Not only is the NFL robbing fans of a “snow game”, but it’s also forcing an indoor carnival in Ford Field to dismantle. No Fun League truly couldn’t be a more fitting description.

Takes No Fun League to a new level https://t.co/quxENsjzsa

The NFL has made no shortage of questionable decisions, but they actually got this one right. The projected snowfall would be a nightmare for the grounds crew to handle before game time. Plus, the conditions would likely make it dangerous for any fans to attend.

While a “snow game” would be exciting, the safety of everyone involved is ultimately more important.

Jokes aside, hope everyone in Buffalo stays safe this weekend 🙏 https://t.co/ize7nsABO9

After a crushing defeat to the Minnesota Vikings last week, the Bills will hope to rebound against the Browns in Detroit on Sunday. Then they’ll play again at Ford Field on Thanksgiving against the Lions.

Unfortunately, fans will have to wait until the Bills return home in Week 14 for another shot at a “snow game”.