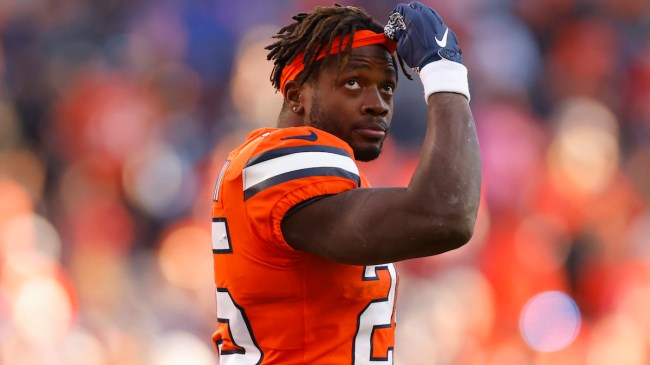 The Denver Broncos have been one of the bigger disappointments of 2022. They fell to 3-7 after losing in overtime to the Las Vegas Raiders on Sunday and it’s finally set some changes into motion.

Despite QB coach Klint Kubiak taking over playcalling duties from HC Nathaniel Hackett, it was another embarrassing performance from the Broncos’ offense. They started hot with a touchdown on their opening drive but only managed field goals after. The major turning point arguably came just before halftime as they fumbled, literally, the opportunity to take control of the game.

Running back Melvin Gordon fumbled on 3rd & 1 from the Vegas 3-yard line leading to a blocked field goal. It was his 5th fumble of the season and seemingly the final straw. On Monday, the Broncos announced they had waived the veteran running back.

Sources: The #Broncos make a move following Sunday’s loss, as Denver has waived veteran RB Melvin Gordon. A respected player who spent 3 years with the Broncos, Gordon’s fumbles proved too much. A fresh start for all parties.

It’s been a similar story for much of the season for the former Chargers running back. Gordon played second fiddle to Javonte Williams before the second-year RB got injured. Then he split carries with Latavius Murray, who the Broncos signed to replace Williams, before eventually losing out more on the workload.

On top of the lackluster production, Gordon leads NFL running backs in fumbles (5) through 11 weeks. He has also fumbled a shocking 12 total times since joining the Broncos in 2020. So the decision to waive him isn’t all that unexpected.

Melvin Gordon played in 41 games with the #Broncos.

Perhaps what’s worse is how costly his fumbles have been. While Sunday’s fumble was recovered by the Broncos, it kept them from taking a two-score lead into halftime. The outcomes have been even worse for his other fumbles over the past two years.

Three of Melvin Gordon's last seven fumbles as a Bronco were returned for touchdowns (including last season). Another two of those fumbles came within 2 yards of the goal line.

With Gordon waived and Chase Edmonds expected to miss multiple weeks, the Broncos will rely heavily on Murray moving forward. Marlon Mack, who has not seen a carry yet, will also likely get an increased workload too.

It’s a good sign that the Broncos are finally making some much-needed changes, but it’s questionable why they’ve waited so long for it. Plus, Gordon was only a small part of the team’s problems anyways.

Unless things turn can around in Week 12 against the Carolina Panthers, Hackett is still definitely on the hot seat.