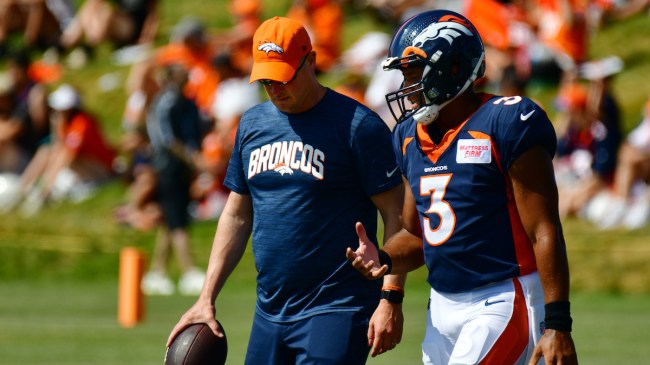 The Denver Broncos had high expectations when they mortgaged the future to acquire Russell Wilson. Some might even say Super Bowl aspirations. Instead, they sit 3-8 with the worst-scoring offense in the NFL.

Head coach Nathaniel Hackett has been on the hot seat for much of the season, but the attention turned toward the Broncos’ starting QB in recent days. On Tuesday, Tom Pelissero of NFL Network reported that Wilson, not Hackett, had lost the locker room. On top of that, half of the team apparently didn’t show up for his birthday party either.

Even still, it appears Wilson has the full support of his head coach. On Wednesday, Hackett spoke to reporters and shut down the “gossip” surrounding his starting quarterback.

Nathaniel Hackett when asked about an NFL Network report that Wilson has “lost” some in the locker room: “To me, it’s all gossip. We have a fantastic locker room. I’ve never seen somebody work that hard and try to embrace a team like he has.”

After the viral exchange between Wilson and Mike Purcell during Sunday’s loss to the Carolina Panthers, these recent rumors aren’t much of a surprise. It’s also not surprising that Hackett would deny it though. Openly admitting to locker room issues is never a good look after all.

“To me, it’s all gossip. We have a fantastic locker room. When you look at guys like Russ, he’s unbelievable. I’ve never seen anybody work that hard. I’ve never seen somebody try to embrace a team like he has. … Russ is awesome. We just need to do better as a team. It’s that simple. All that stuff, it is what it is. I love Russ,” Hackett said.

Hackett was also asked whether any changes would be made at the quarterback position for the six remaining games in the season. He didn’t hesitate to answer no.

“Not even a thought. Not even a question. Russ is our quarterback,” he clarified later.

Wilson has looked like a shell of his former self this season, but the decision is understandable. The Broncos probably aren’t eager to bench the quarterback the team just signed to a 5-year, $245 million contract.

Of course, it’s also not acceptable to lose seven of the last eight games with a quarterback that just signed a massive extension. So the Broncos and Hackett are truly in a tough spot.

Unless things improve in Week 13 against the Baltimore Ravens, they should expect the calls for Wilson’s benching to continue. At this rate, Hackett may not be the one making the decisions for much longer anyways.