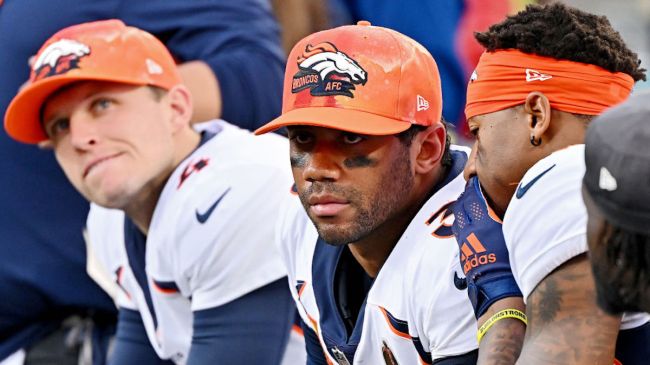 The Denver Broncos suffered their seventh loss in eight games on Sunday and it appears frustrations are finally boiling over within the team.

The Broncos entered Week 12 with the worst scoring offense in the NFL, which showed in their 23-10 loss to the Carolina Panthers. Russell Wilson completed 19-of-35 passes for 142 yards and only managed to score a touchdown in garbage time.

It’s nothing new for the Broncos’ offense, but their defense seemingly had enough on Sunday. While trailing 20-3 early in the fourth quarter, Broncos DT Mike Purcell was seen screaming in Wilson’s face as he jogged off to the sideline.

Mike Purcell had some words for Russell Wilson has he returned to the Broncos sideline pic.twitter.com/FL6RaFwAT8

The heated exchange was surprising, but Purcell’s frustrations are at least understandable. The Broncos’ defense ranks 3rd in total yards allowed per game and points allowed per game. They’ve even held their opponents to less than 20 points in 8 out of 11 games this season.

Unfortunately, the Broncos’ offense is averaging less than 15 points per game in comparison. At 3-8, they’re essentially out of the playoff picture now. It’s hard to blame anybody besides the offense for that.

Despite Purcell’s apparent annoyance with Wilson’s performance, both actually downplayed the verbal altercation following the game. According to the Broncos’ defensive lineman, he was simply trying to provide “a spark” as their offense took the field.

Mike Purcell, on what led to the heated moment with Russell Wilson on the sideline: “Frustration. We want a spark on something. We are all in this together, period.” pic.twitter.com/3Xa6YDlWyr

Purcell clarified that his frustrations weren’t directed solely at Wilson or the offense. He admits the defense was also disappointing, so he was just irritated by the lackluster performance on both sides of the field.

Wilson echoed a similar message during his post-game interview and revealed that he agreed with Purcell’s frustrations. The Broncos QB went on to claim there’s no animosity between the two, which seemingly put to bed concerns that trouble could be brewing within the team.

It looked like Mike Purcell was ticked at Russell Wilson, but both said that wasn't the case. Wilson: “He just said we gotta F-ing go. And I agreed. Me and him were on the same page. There’s no animosity there at all.” #9sports

Even still, the verbal exchange is not a good look for the Broncos. After three consecutive losses, fans are growing more and more frustrated with Wilson and HC Nathaniel Hackett.

The Broncos already switched up play callers and then made a change at running back, but nothing has helped. Perhaps, Purcell’s fiery moment can inspire them to perform better for the remainder of the season. However, it won’t be easy with the Baltimore Ravens and Kansas City Chiefs up next.